You are here: Home / News / News / The Taxi Charity Visit to Portsmouth

The Taxi Charity Visit to Portsmouth

The Taxi Charity for Military Veterans visited Portsmouth in April with nine volunteer London Taxi drivers, transporting 18 veterans for a memorable visit to the island city that for centuries has been synonymous with the Royal Navy.

The Royal Navy veterans, many of whom served in World War Two, were special guests of the Royal Navy and Royal Marines Charity (RNRMC), who funded and organised the three-day VIP visit. 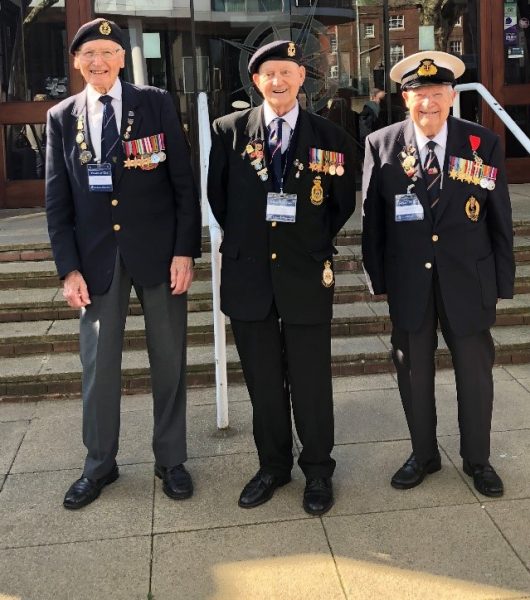 On arrival at Whale Island, the UK Naval Headquarters, the drivers and veterans had lunch in the Wardroom of HMS Excellent where they were greeted by Rear Admiral Martin Connell, the 1st Sea Lord’s Representative.

Following the hearty lunch, they toasted their hosts with a tot of the Navy’s traditional tipple, Pussers Rum, before embarking on a short tour of the base and its Maritime museum.

The next day, Thursday 11th April, the veterans visited Southwick House, the former D-Day headquarters and site of the original Map Room where General Eisenhower and Field Marshal Montgomery planned the Allied invasion of Normandy, which became the turning point of WWII in Europe.

It was a nostalgic return for former WREN and recent recipient of the Legion d’Honneur, Marie Scott, who aged 17 worked as a switchboard operator at Fort Southwick, the underground communication centre that played a pivotal part during D-Day.

Later that afternoon, the party were welcomed by the David Fuller – Deputy Lord Mayor of Portsmouth at the Emirates Spinnaker Tower, where everyone enjoyed a cream tea while taking in the panoramic views of Portsmouth Bay and the Historic Dockyard.

The following day, the veterans were guests of the HM Naval Base, where they met and spoke to apprentices from BAE Systems, before joining specially invited guests for HMS Dragon’s emotional homecoming following the Type 45 destroyer’s seven-month deployment to the Middle East.

“The Taxi Charity for Military Veterans would like to extend a special thank you to all the staff at the RNRMC for this hugely successful trip. Their enthusiasm and hard work ensured the stay in Portsmouth was thoroughly enjoyed by all the veterans, committee members and cab drivers.”

To find out more about the charity or to donate visit the website taxicharity.org

The Royal Navy and Royal Marines Charity supports sailors, marines and their families for life.