You are here: Home / News / News / The Taxi Charity was saddened to learn that 101-year-old Wilf Oldham MBE has died

Wilfred Edward Oldham MBE, from Radcliffe, near Bury was born in 1920 and  had two daughters  three grandchildren and one great grandchild. 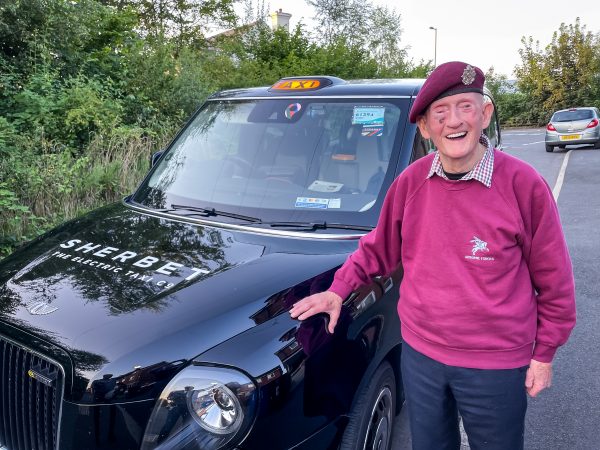 “Wilf was a true gentleman and everyone at the charity will really miss him. He served with the Border Regiment who hold a very special place in my heart. Over the years I have known many WWII veterans from The Borders who were at Arnhem but sadly I think Wilf may have been the last. I remember fondly when he was awarded the MBE he said, ‘I’m a very humble man and I feel very proud because obviously somebody recommended me or put my name forward’ and that is exactly what he was, a very humble man.”

Wilf Oldham MBE, served with 1st Battalion, The Border Regiment, and during WWII, took part in the Battle of Arnhem in September 1944, part of Operation Market Garden, which was depicted in Richard Attenborough’s epic 1977 Hollywood film A Bridge Too Far. He was one of the few who successfully escaped across the River Rhine at the end of the battle. Earlier this year two Taxi Charity volunteers recorded an interview with Wilf and a message for the people of The Netherlands to form part of their Arnhem commemoration service.

Frans Ammerlaan, from The Market Garden Foundation in The Netherlands, said,

“Wilf was a very well-known Arnhem veteran. On many occasions he was the guest of honour at the Arnhem Vitesse football club during the commemorations. He was a very humble and approachable man and recently appeared in the Taxi Charity film that many of the people from the Arnhem region saw. It is so sad that in the film he said that he hoped to return to Arnhem next year and we are moved that he will not be able to fulfil his hope to return.”

“Really sad to hear that Wilf Oldham has passed away. He was wonderful and charming fella who my fellow cab driver and Taxi Charity volunteer Joe Cartwright and I recently interviewed. We talked to him about his life and time in the military including being a veteran of Market Garden.”

“Very very sad news. A wonderful man. He made Jon and I very welcome at his house recently during the interview we did with him. Another Arnhem hero sadly gone but they will all be remembered for playing their part in securing freedom for future generations.”