You are here: Home / News / News / The UK’s only adoption service aimed at the Armed Forces celebrates 21 years 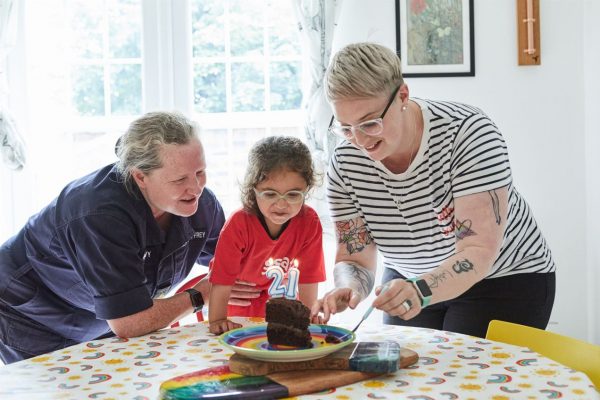 This National Adoption Week, SSAFA, the Armed Forces charity is celebrating the 21st anniversary of its Adoption Service, which has placed over 300 children with Forces families since the service began in 2000.

SSAFA has been a registered independent adoption agency since 2000 and has placed 303 children over the last 21 years.

As the UK’s only adoption agency aimed at Forces families, SSAFA is the expert in military adoption and understands the complex demands of military life. SSAFA has worked successfully with individuals and couples from all service backgrounds to create loving families.

In 2020, 409 households were supported by SSAFA’s Adoption services, and 9 new households were approved to adopt. Since the service began in 2000, the team has helped hundreds of families through the adoption process and importantly provided them with post adoption support.

SSAFA has been a registered independent adoption agency since 2000 and was developed to counteract the difficulties faced by some serving personnel looking to adopt. While many members of the Armed Forces can adopt via their local Regional Adoption Agency, some adoption agencies are not as positive about applications from serving personnel due to misconceptions around military lifestyle.

“We’re delighted to be celebrating 21 years of our adoption service this National Adoption Week. When the service began in 2000, we set out with the aim to provide a tailor-made service for members of the Armed Forces. We have done just that by developing a unique understanding of the challenges but also the opportunities offered by military lifestyle. We are the military adoption specialists.”

In November 2019, the adoption team was awarded an ‘Outstanding’ by Ofsted inspectors for all three inspection judgements: the effectiveness of leaders and managers, how well children, young people and adults are helped and protected and the overall experiences and progress of service users.

The Ofsted report praised the inclusive nature of the SSAFA adoption service.

SSAFA champions equality and diversity, with the adoption service welcoming applications from the whole of the serving military community. In 2018, 40% of their adopters were in same-sex relationships, four times higher than the national average. The team’s Social Workers and Adoption Panel members have specialist training in LGBT+ adoption and work closely with the Armed Forces, Stonewall and their partner agency, New Family Social, to support LGBT+ adopters.

In June 2018, after unsuccessful attempts at IVF and a miscarriage, Royal Navy Reservist Ann and her wife Emma began their adoption journey with SSAFA.

At the start of 2020, just a few weeks before the Covid crisis hit, the couple saw the profile of a 13-month-old little girl who they wanted to be theirs. By June 2020, they were matched, and by July 2020 were able to bring their daughter home, with the formal adoption order arriving in December 2020.

“As soon as we went into the foster carers to meet her, I popped my head around the corner, she was crawling on the floor and just looked up at me and my heart just melted…every time she smiled my heart melted, every time she did something really cute, or she stood up, or she looked at me, my heart melted.”

Throughout the process, Ann and Emma were supported in their quest to parenthood by SSAFA Adoption Social Worker, Roger, who they describe as their ‘rock’, for not only facilitating and guiding their adoption journey, but for supporting them as they attempted to adopt during the Covid-19 crisis, and multiple lockdowns.

“SSAFA is an amazing charity and, as a same-sex couple, we have always felt seen and heard and can’t thank the adoption team enough for all they do. It is important to us, as a couple, that we see ourselves reflected in a service or organisation we are going to use, and that is what we got with SSAFA.”

To find out more about SSAFA’s Adoption Service, visit ssafa.org.uk/adoption