You are here: Home / News / News / Three intrepid explorers cross the Atlantic in a rowing boat on behalf of Alabaré’s Homes for Veterans

Following over 30 days at sea, supporters of the Alabaré charity are holding their breath as they wait for three explorers to cross the finish line in Antigua next weekend. The Atlantic Nomads chose Alabaré’s Homes for Veterans as their charity beneficiary as they took on the Talisker Whisky Atlantic Challenge which started in December. The challenge which brings together people from all walks of life covers over 3000 miles of ocean and is the ultimate feat of human endurance. 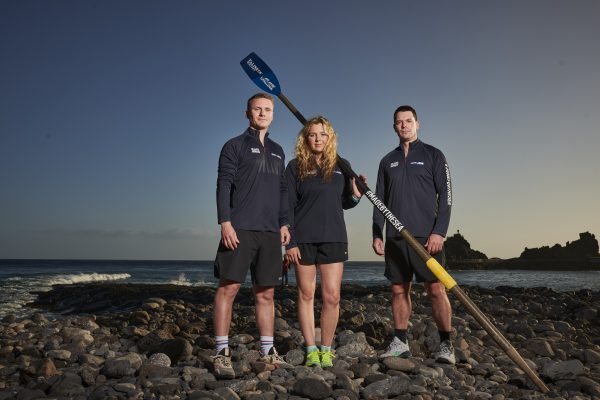 This year, a record breaking 36 teams took on the challenge, crossing the Atlantic in rowing boats in teams of one to five. Departing La Gomera in the Canary Islands on 12th December the teams have been rowing in constant shift patterns until they reach their destination in Antigua & Barbuda. The first boat came in this weekend taking 34 days but it has been known to take up to 87!

As with all feats of endurance the Atlantic Nomads have had to battle numerous obstacles. An incredibly hot start to the event meant they had to travel much further south this year to pick up the right weather patterns, keeping to a perfect position when undertaking a race of this kind is a real balancing act. As well as this the team have encountered steering problems, have had issues with their GPS and have broken an oar gate. But they have slogged their way across this brutal ocean, working hard for every nautical mile, rowing solo through the nights and balancing various shift patterns; anything from 2 hours on, 2 hours off, to 1 hour on and 30 minutes off at times.

The team of three (2 men/1 woman) James Woolley, Tom Rose and Taylor Winyard trained for over a year for the crossing. Although no strangers to undertaking adventure challenges, this has been the ultimate test for them as they’ve battled sleep deprivation, salt sores, physical extremes, sickness, as well as being left on their own to tackle the continuous challenges that the ocean and the isolation have thrown at them.

The crew are expending a huge amount of energy – and so need to eat a huge amount of food to replace that spent energy. The dehydrated food the team are eating lasts a long time without going off, is highly nutritious and importantly reduces the weight and the space taken up in the boat. To eat they convert ocean water into drinking water via a solar-powered desalinator unit they have on board, they boil that water on a camp stove, and then pour the hot water into the bag of dehydrated food. Like a posh pot noodle. Race challenge rules state that each team needs a minimum of 60kcal per kg of starting body weight – so a 100kg rower needs to take 6000kcal of food per day. When you bear in mind that the normal recommended daily intake is 2000 and 2500kcal for women and men respectively (on land!) – this shows the extremes that this team are fuelling themselves during this crossing.

As well as witnessing incredible sunsets and having pods of dolphins for company the team will certainly be recounting some incredible stories when they arrive.

With less than 500 nautical miles to row the Atlantic Nomads have undertaken a phenomenal row. Their boat, Doris, a 28ft craft with a small cabin at either end is about the length of 3 saloon cars, offers no home comforts and not even a loo!

The team are facing stiff competition and will hopefully continue to push their limits while maintaining a position of 10th in all boats. Supporters have been following race progress on the YBB Race app where it is obvious the tempo has changed in recent days as the teams get ever closer to their destination. With various classes, essentially not all open class boats are deemed equal, for Tom, James and Taylor, who are just a trio, to be hot on the heels, and catching ‘best in class’ teams, is outstanding.

As the team continue to fly along, they are raising vital funding to provide supported accommodation to British Armed Forces veterans who are homeless, or at risk of becoming homeless. Having raised just over the £120,000 through sponsorship they needed just to enter the race, the team have pledged monies raised over and above, to Alabaré’s Homes for Veterans, which provides a home and support to over a hundred vulnerable veterans every night in the UK and relies on donations to operate.

While their enthusiasm is boundless, they will need all the encouragement they can get and deserve in these final days, so please be inspired to support and cheer them on by donating on their Just Giving Page or by downloading the YBB app from your app store for real-time updates.