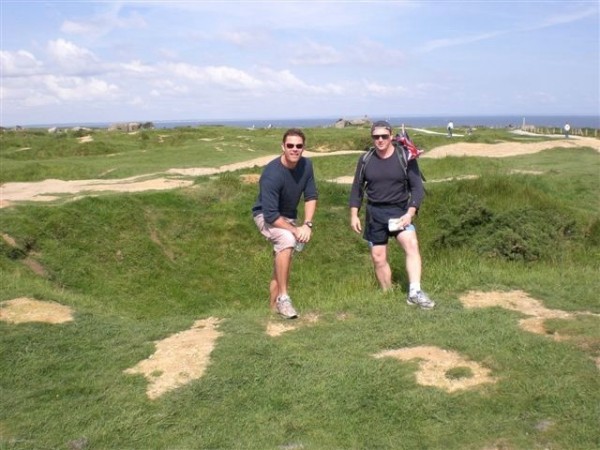 Three military charities are coming together to relaunch the D-Day 44 Challenge, an event first run by Lt Col Mike McErlain, a serving Army surgeon who changed the lives of many injured service personnel for the better.

Mike, his wife Jo and his brother-in-law Giles Barnes set up the run in 2009 but tragically Mike collapsed and died while doing the run himself in 2013. Now with Jo’s blessing the event returns in 2018, the 74th anniversary of the D-Day landings, to continue its important fundraising work, with the three chosen charities being Blesma, The Limbless Veterans, Blind Veterans UK and Combat Stress.

This year, over 5-7 June, participants can take on the full 44-mile run or a 22-mile walk. The route hugs the stunning Normandy coastline, taking in the beaches and villages where Allied troops landed in 1944. On 6 June, Runners start at Point Du Hoc with walkers joining them at Arromanches. Both groups finish at the historic Pegasus Bridge on the same day.

For an initial registration fee of £150, the three-day package includes return transport from London, two nights’ accommodation, all meals, including a pasta party the night before and full medical and event support. A fundraising pledge of £1000 will mean no further costs – a fundraising pledge of £500 will incur a further £340 fee to cover running costs of the event.

Lt Col McErlain was a consultant orthopaedic trauma and spinal surgeon based at Frimley Park Hospital in Surrey. Mike joined the Royal Army Medical Corps (RAMC) 1990 and the Parachute Regiment in 1996, completing operational tours of Northern Ireland, the former Yugoslavia, Iraq and Afghanistan as well as working at the Defence Medical and Rehabilitation Centre at Headley Court during his career. He was passionate about remembering those on the Normandy Beaches who gave their lives for our freedom today, and saw the D-Day 44 Challenge as a way of commemorating them.

Mike’s widow Jo said: “I am thrilled that we are continuing Mike’s legacy by raising money for three incredible charities. The D-Day 44 Challenge along the Normandy Beaches is an epic journey of adventure. The massive sense of achievement and pride the participants will gain in helping such important charities, make the challenge all the more profound”.

Community and Events Manager at Blesma, Sophie Allen, says: “Blesma, Blind Veterans UK and Combat Stress are honoured to be working with Jo McErlain on furthering Mike’s legacy with the D-Day Challenge. Between us we are aiming to raise as much money for our wounded veterans as possible, while honouring those past generations who also sacrificed so much for their country.”

About Blesma, The Limbless Veterans
Blesma, The Limbless Veterans is the national charity for all limbless serving and ex-service men and women, their widows and dependents. It is a membership organisation which helps wounded service men and women rebuild their lives by providing rehabilitation activities and welfare support. Their membership includes those who have lost the use of a limb, an eye or the sight of an eye.

Blesma was formed in the years following the First World War and became a national charity in 1932. Blesma today has around 3,500 Members and widows. The membership consists of men and women who have served during the Second World War and the many subsequent conflicts and peacekeeping operations since, including the Falklands, Northern Ireland, Iraq and Afghanistan.

About Blind Veterans UK
Blind Veterans UK is a national charity that believes that no-one who has served our country should have to battle blindness alone. It provides blind and vision-impaired ex-Service men and women with lifelong support including welfare support, rehabilitation, training, residential and respite care.

About Combat Stress
Combat Stress is the UK’s leading charity for veterans’ mental health. For almost a century, the charity has helped former servicemen and women deal with issues like trauma, anxiety, depression and post-traumatic stress disorder.
The charity provides support at treatment centres in Surrey and Ayrshire and also through its network of community teams. Its 24-hour Helpline is open to all veterans and serving personnel, as well as families, friends and carers.