Commander Jane Allen set off from HMS Victory on 21 October last year, to walk anticlockwise round the coast of mainland UK for two naval charities, the WRNS BT and RNRMC. Recently she ‘clocked’ 3,000 miles and walked into Campbeltown. Here she provides a personal reflection on her journey so far.

Like anything in life, it is the extremes – good and bad – that stand out when I think back over my 3,000 miles walked since leaving Portsmouth.  A good proportion of that time has been spent in Scotland – we crossed the border at the end of April – and I had perhaps underestimated just how long the ‘Scotland Experience’ would take!

I currently feel I’m undertaking two walks in parallel – my Victory Walk and, since passing John o’ Groats, I’m also walking to Land’s End via the long route.  Like Essex, the North West coast of Scotland has found me feeling demoralised by the apparent lack of progress south, as I’ve spent most of time going in and out of Scotland’s wriggly bits!  Meanwhile, the support team (husband Frank) has used another ‘d’ word – difficult – in his efforts to support me logistically.

Where I’ve been unable to walk around a peninsula, I have opted to go out and back, hoping the vehicle could retrieve me for the return leg. This has often given the driver white knuckles as he’s squeezed through narrow stone bridges or used first gear to inch his way up and down severe gradients. Somehow, we’ve both survived and agree that each remote hamlet reached at the end of a long windy road has been worth the effort. Every such community has had a different feel about it.

I’m frequently asked if I’ve ever wanted to ‘pack it in’ and I can honestly say ‘No’.  However, there are some days which are enjoyable and others that prove otherwise. There have been memorable moments because they’ve been so awful, but conversely others have been very enjoyable.  Rounding a headland and seeing a landmark, be it lighthouse, famous bridge or building is always exciting, although bad weather can easily change my mood when a long- awaited view is snatched from my hopeful gaze.

Landmarks that mean little to an armchair reader have had the opposite effect on me. Reaching mainland UK’s most easterly, northerly and westerly points at Lowestoft, Dunnet Head and Ardnamurchan point respectively have been key moments, whatever the weather. Dunnet Head was particularly memorable because Scotland’s extended daylight hours allowed us to watch a stunning sunset at 2230, and total darkness never really arrived.  Naturally, this situation has already begun to change, with evenings depressingly beginning to draw in.   On safety grounds alone, this will undoubtedly affect my walking schedule as we go into our second winter on the road.

Throughout the Victory Walk I’ve had two major concerns: safety and injury. Covering a lot of my route on roads, both major and minor, I am constantly aware of my mortality! Particularly on the snaky Scottish roads, I’ve regularly criss-crossed from one side to the other depending upon which way the road ahead bends.  Concentration is key, listening for traffic in front and behind and also being aware of what type of vehicle is heading towards me.  I always try to get up on a verge, especially when huge articulated lorries approach; my biggest fear is stumbling on a grassy verge into the path of an oncoming vehicle.  One day I was six miles behind my schedule, but those last miles all had to be walked on a busy ‘A’ road during ‘rush-hour’.  I knew I wasn’t mentally alert enough to complete the walk. Rather than beat myself up for failing on distance, I acknowledged I’d be a liability to myself and others and stopped walking early.

My other big fear has been injury.  Indeed, I probably became complacent as I’d walked over 2,000 miles before suffering a severe tendon strain. That, above all else, was the thing that bashed my self-confidence at a critical time: I was poised to walk out to remote Cape Wrath and that set-back could not have come at a worse moment.  It was very hard to postpone that walk for a week and take a rest, but I did. It worked, and I was able to enjoy a worry-free walk out to Cape Wrath.

During the past 10 months I’ve been frequently asked about my feet, but rarely about my mental approach.  For me, the feet and legs tend to look after themselves, but walking can take its toll mentally.  I’ve never felt like ‘giving -up’, but the combination of cramped living conditions in the support vehicle, long periods of bad weather, and the daily grind of having to achieve another day’s mileage target are all things that are more testing.

To anyone thinking the Victory Walk is a holiday – think again!  Primarily it’s a charity walk lasting more than a year and it’s hard work. Throughout, we’ve been struck by people’s spontaneous generosity and enthusiasm. Sea Cadet units and the RNA have been particularly helpful, while other kindnesses have included offers of practical help along the route, being given a bag of groceries, handed homemade cakes and of course, cash donations. With so much bad news in the media it is heartening to see the better side of human nature.

To donate go to www.Virginmoneygiving.com/victorywalk17-18.

To find out more about Jane’s Victory Walk go to www.victorywalk.uk. 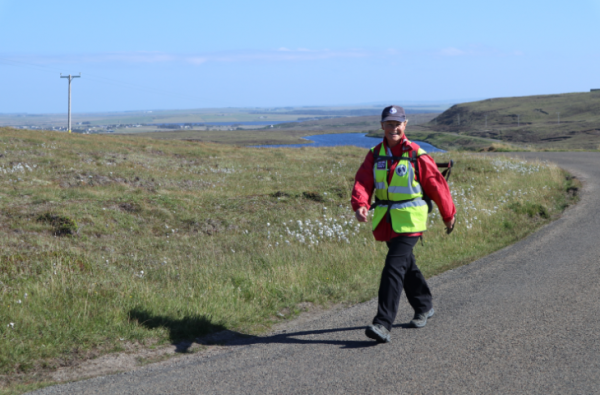