You are here: Home / News / News / Tickets release for the first two of five concerts celebrating the 10th Anniversary of the Military Wives Choirs

The Military Wives Choirs is a community of nearly 2000 women in over 70 choirs across the UK and internationally who celebrate a love of singing and the power of shared experiences. 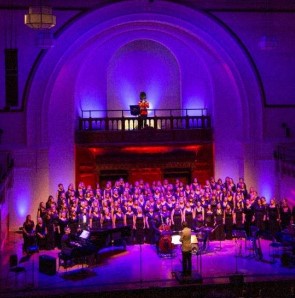 2022 marks 10 years since the formation of the charity, a milestone that will be celebrated throughout the year with a series of five concerts taking place across the UK, at St Albans Cathedral, Winchester Cathedral, Lincoln Cathedral, Exeter Cathedral, and Greyfriars Kirk in Edinburgh.

Tickets are now on sale for the first two concerts in the series; St Albans Cathedral will host the first of these exciting concerts on Saturday 18 June 2022, bringing together over 200 choir members from 15 Military Wives Choirs, including overseas choirs. Tickets are now available from St Albans Cathedral’s website at: www.stalbanscathedral.org/Event/militarywives-choirs-10th-anniversary-concert.

Winchester Cathedral will see the second concert in the series on Friday 22 July 2022, hosting 160 members from 13 Military Wives Choirs. Tickets are available through Winchester Cathedral’s website from Monday 9 May 2022 at: www.winchestercathedral.org.uk/event/military-wives-choirs-10th-anniversary-concert/. This concert will also be live streamed.

Each concert in the series will feature an appearance by soprano and Ambassador Laura Wright. Laura has a long-standing relationship with the Military Wives Choirs, having collaborated on the 2018 album “Remember” by co-writing and appearing on the track Brave.

“It is hard to describe the impact that being part of an all-female ensemble can have, particularly as a  Mum. Performing with and writing music for the Military Wives Choirs back in 2018 was such a pleasure—it gave me an enormous sense of warmth and made me feel so proud. However, after recently working closely with individual members of the Military Wives Choirs, I realised that many of these women live their whole lives with the same level of extreme isolation that many of us have just experienced for the very first time. Singing gives us emotional awareness—it allows us to recognise and express our feelings, as well as relate to the feelings of others around us. I am thoroughly delighted to be singing alongside this amazing group of women once more.”

As both an independent charity and a subsidiary of SSAFA, the Armed Forces charity, the Military Wives Choirs works collaboratively with SSAFA in their mission to provide support to our Forces and their families.

If you would like to find out more about the Military Wives Choirs and buy tickets for the concert series, please visit: www.militarywiveschoirs.org/concerts