Thousands of messages paying tribute to all the men and women who contributed to the outcome of the Battle of Britain have been sealed in a time capsule to mark the 80th anniversary of the battle’s end. 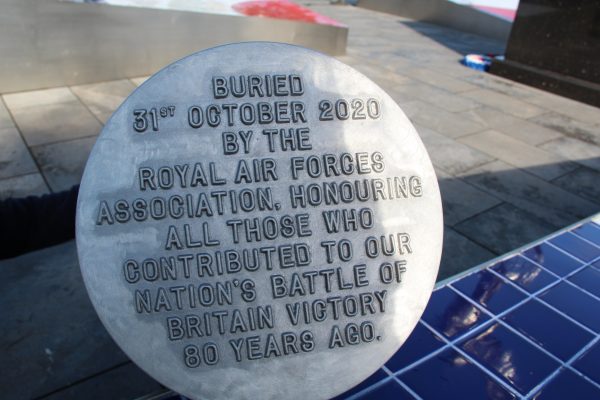 The Royal Air Forces Association, which provides support to the RAF community, invited members of the public to document their gratitude so that future generations could experience the groundswell of appreciation felt by people in 2020.

Almost 6,000 tributes, including some from celebrities, were sent to the charity which then sealed them in a capsule for burial in the Association’s Remembrance Garden at the National Memorial Arboretum, Staffordshire.

The burial ceremony, involving just a handful of people due to COVID-19 restrictions, marked the 80th anniversary of the last daylight raid in the UK by Germany’s Luftwaffe – 31 October 1940.

The tributes inside the capsule included many from people whose family members served, and, in some cases, died, in the RAF during the Battle of Britain. Others were written by serving and former RAF personnel paying tribute to their predecessors, while the majority were from members of the public who simply wanted to thank ‘The Many’ involved.

“Thank you to all the men and women working behind the scenes, and whose role in the Battle of Britain has not always been recognised. And thank you to the crews of Coastal and Bomber Command, including my father, who were taking the fight to the enemy at the same time as the crews of Fighter Command were defending the skies of Britain.”

Another mentioned that their mother had spent uncomfortable nights sheltering under a dining room table at home in London while the bombs dropped. They wrote:

“Mother recalls clambering over bomb wreckage to get to school each morning. The heroes who saved them and future generations cannot be thanked enough.”

Rory, who lives in Lincolnshire – home to more than 40 RAF stations and airfields during the Second World War – wrote:

“I salute every single individual who contributed to securing victory – engineers, operations staff, medical personnel and postal workers, just to name a few. Their incredible courage, resilience and sacrifice is an example to us all, and I can’t thank them enough.”

Among those present at the time capsule’s burial was Terry Whittaker (83), a member of the RAF Association’s Erewash branch in Derbyshire. On behalf of all veterans, Terry, who did his National Service with the RAF, paid tribute to everyone involved in the battle.

“I salute all those who were involved – ‘The Few’ who flew and ‘The Many’ who supported them in this endeavour. Their sacrifices were great, but their legacy of freedom was greater.”

Serving personnel were represented at the ceremony by Sgt David and SAC Motriuc, who are based at RAF Cosford. Cadet Corporal Manpreet Digpaul from 2070 (Glenfield) Squadron RAF Air Cadets joined in via a video link on behalf of the next generation of the RAF.

Speaking after the ceremony, the RAF Association’s president, Air Marshal Sir Baz North, said he hoped that preserving a record of the admiration felt for those vital wartime workers would contribute to future generations’ understanding of the Battle of Britain’s significance.

“We don’t know when our time capsule will be dug up and opened, but we do know that whoever reads these tributes in the future will be bowled over by today’s society’s overwhelming gratitude to everyone who contributed to the Battle’s hard-won victorious outcome.”

More information about the Battle of Britain and about the RAF Association’s work to support the RAF family can be found at: battleofbritain.rafa.org

🚨The Positive Pathways Programme closes at noon on Monday 30 November. 💰Grants of £35k are available for activity… twitter.com/i/web/status/1…