You are here: Home / News / News / Top Scottish military band will return in 2021

A series of concerts performed by Scotland’s best-known military band in aid of a leading Armed Forces charity Poppyscotland will now take place in 2021 following this year’s global coronavirus pandemic.  The Band of The Royal Regiment of Scotland were all set to embark on their third nationwide tour to raise funds for the charity, but have instead shifted four concerts to roughly the same dates next year. 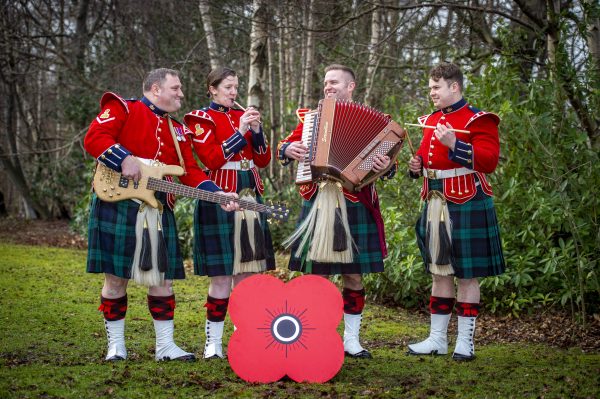 The tour, which is entitled ‘Walking With Oor Ain Folk’ and is being run in collaboration with Hawick folk musician and songwriter Alan Brydon, had planned to visit Hamilton, Livingston, Montrose and Hawick before Covid-19 took hold. However, today it was announced that all four towns will still play host to the Band, with performances in September, October and December 2021 respectively.

Major James Marshall, the Director of Music to The Band of The Royal Regiment of Scotland, said:

“After the reception we’ve received across the country in the past two years we were so looking forwarding to visiting new places and performing a new programme of music this year. However, given all that is going on in the world in 2020 – and the Band’s role in Covid-19 relief work – we felt it was only right to postpone the tour until next year. But when next year comes, we hope the public will come out in force once again to support Poppyscotland and the vital work they do for the Armed Forces community.”

“Over the past two years, The Band of The Royal Regiment of Scotland has really captured the hearts and minds of the nation, and we were all so looking forward to the Walking With Oor Ain Folk tour. However, the safety of the Band, our staff and volunteers, and, of course, the public in general was always our main concern, so it was only right for us to postpone the four concerts until next year. What’s more, Band members have also been re-tasked to support the Covid-19 response efforts, so we would like to thank them for doing all that they can to keep us all safe.

“But given that 2021 will mark precisely 100 years since the inception of our iconic red remembrance Poppy, we are sure that the rescheduled tour will be even more poignant, and I would encourage everyone to come along and enjoy a concert next year. The money we raise from special events such as these provides essential funding so that Poppyscotland can continue to support the country’s Armed Forces community and their families.”

The Band is one of the 22 Regular Army bands and is based at Dreghorn Barracks, Edinburgh. It comprises 45 talented musicians who are also serving soldiers and it is a symphonic wind band with the additional capability of a Ceilidh band. The main role of the band is to support the Army, the State and Ceremonial occasions that occur within Scotland.