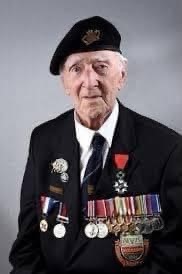 The Taxi Charity for Military Veterans was saddened to hear of the death of one of the veterans they have supported 101-year-old, WWII veteran Hector Hugh MacDonald Duff.

“Hector joined the Taxi Charity on its annual visit to Normandy in 2018, accompanied by his son Tony. He had served with both the 7th Armoured Division in North Africa, and the Royal Tank Regiment – part of the 50th British Division which landed on Gold beach in Normandy in 1944. He was a true gentleman who made a big impression on everyone he met. He was awarded many gongs during his lifetime, but we will remember him as a very humble man who extended the hand of friendship to everyone he met. The charity sends our condolences to his family and friends.”

“Hector’s military record is impressive. 7th Armoured were a battle-hardened group who fought in all the main European theatres of the Second World War and for many there seemed to be no end to the fighting that they had to endure. Alongside that, Military Medals were not handed out simply for turning up. To have won a Military Medal would have taken an extraordinary level of courage and determination.

These experiences of the hardest and most challenging sides of life did not make Hector a hard and unfeeling person. He was always warm and considerate and a true gentleman. Even when in a wheelchair, he would insist on standing when approached by a lady. Hector set an example to which many could only aspire. His work with children was exemplary and it is a fitting tribute to his lasting memory that he sponsored the Hector Duff prize for the best entries from Manx schools in the annual Young Historians competition run under the auspices of the Spirit of Normandy Trust.

Hector stood as a shining exemplar, showing just how to set a positive example in today’s world. His passing leaves an unfillable gap, and he will be sorely missed. In the words of a poem of tribute written recently by a serving Major General “farewell old friend, sleep well, you can stand down, but your memory will live on”

“Hector was many things to many people: father, friend, police officer, driving instructor, passionate worker for ex-services personnel, guardian of war memorials, forceful advocate for veterans and their widows on the war pensions committee, brilliantly articulate storyteller, who used his powers to tell young people of the horrors of war, twinkle-eyed networker and, of course, tremendously brave soldier.

In company with many of his peers, Hector seldom if ever spoke about his wartime experiences until he was in his 60s. It was then that he chose to start talking to young people about war, about its horrors and about its futility. Articulate and passionate, he made war real for young people and he made them realise that it is not like a film or a computer game. He made them know that it needs to be prevented. He used to tell them that he never hated the enemy, that they were young men just like him, who had families at home and who were just doing their duty. It was not just young people who heard this from him. He could bring a room full of adults to a damp-eyed silence when he was talking about war.”

“The response from the people on the Isle of Man has been overwhelming which shows just how much he was loved and admired.”