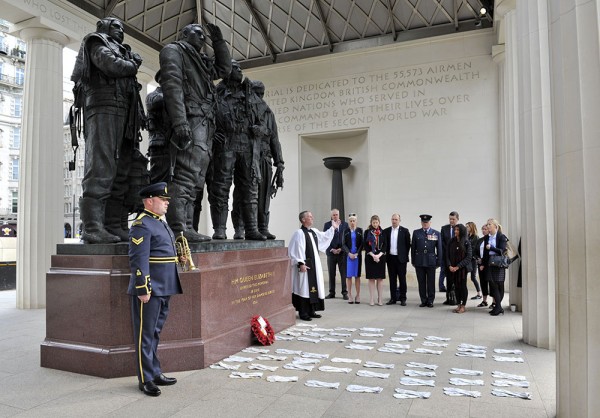 Today marks 75 years since the RAF’s now legendary Dambusters set off on their audacious raid to destroy three German dams at the heart of the Nazi war machine.

Fifty-three pairs of gloves laid out by the RAF Benevolent Fund at the Bomber Command Memorial were a stark reminder of the lives lost that night, the families left without a loved one. RAF Chaplain Michael Chatfield paid tribute to the 133 brave airmen who set off on the raid in 1943 and RAF bugler Corporal Andrew Lofthouse signalled a minute’s silence with the Last Post.

RAF Benevolent Fund Director of Fundraising and Communications John Trampleasure laid a wreath in memory of the airmen killed.

He said: “Commemorations like these are an opportunity for us as a nation to pause and reflect on the sacrifice of those brave men and women who defended our country 75 years ago. I am proud to know the RAF Benevolent Fund supported many of the families left bereaved by the raid and continues to support all RAF veterans, serving personnel and their families.”

Jill Owen’s father Sgt Laurie Nichols was killed in the raid, on his 33rd birthday. She was just two years old. Jill said: “My father volunteered for that raid, I’ve always been very proud of his contribution but I did feel like I missed out. Life was very different after he passed away – it was harder for my mother, of course. My brother and I were educated thanks to the RAF Benevolent Fund which I know was a great comfort to her. I think the Bomber Command Memorial is incredible, a real tribute. And it is fitting that 617 Squadron is now taking on all of those new planes too.”

Bomber Command historian and RAF Benevolent Fund Ambassador Steve Darlow said: “Those brave men got in their Lancasters night after night and took the fight to the Germans. It’s hard to imagine what it must have been like for them. Today’s tribute is a fitting way to remember not just the Dambusters crews but all who made the ultimate sacrifice for our freedoms today.”

Tomorrow a gala screening of The Dam Busters film will be live at the Royal Albert Hall and simulcast in 400 cinemas across the country. The first part of the evening will be compered by historian Dan Snow who will conduct a ‘bouncing bomb experiment’ on stage, followed by a screening of the classic film in newly-restored 4k. Tickets rafbf.org

The RAF Benevolent Fund has also opened a Book of Gratitude for members of the public to send their messages of thanks and tributes to Great Britain’s last surviving Dambuster. Visit rafbf.org/book-gratitude to leave your message.

Nigel joined the RAF in 1981 as an apprentice and spent four years working with Jaguar aircraft before becoming a flight engineer. He has spent the majority of his tours working with 47 Squadron on C130 Hercules aircraft and has served overseas in a number of places including Iraq, Africa and Afghanistan. He also spent seven years working on the combat survival unit. Nigel’s ‘day job’ is desk officer for the C130 Hercules but during the flying season he works as Flight Engineer for the Battle of Britain Memorial Flight Lancaster – a job he coveted for nine years before being posted to RAF Coningsby.

Steve is a Bomber Command historian and aviation author with 20 books to his name including Dambusters: Failed to Return. Steve’s grandfather served in Bomber Command and was shot down and became a POW during the Second World War, which eventually led to his death. This family history piqued an interest which has lasted a lifetime and led to Steve founding his own publishing company Fighting High Publishing. The RAF Benevolent Fund stepped in to pay for his father’s education following the death of his grandfather and as a result today Steve is an Ambassador for the charity.

This year marks both the centenary of the Royal Air Force and 75 years since the daring Dambusters raid, an audacious bombing raid to destroy three dams in the Ruhr valley, the industrial heartland of Germany, codenamed Operation Chastise. The dams were fiercely protected. Torpedo nets in the water stopped underwater attacks and anti-aircraft guns defended them against enemy bombers. Initially thought of as a mad cap idea, Dr Barnes Wallis, an aeronautical designer, won over the RAF with his innovative bouncing bomb design. A missile that would skip across the water, hit the dam and roll to the bottom before exploding.

The bomb needed to be dropped at the right speed, at the right distance from the dam and at the right height above the water so needed highly skilled crew. 617 Squadron was specially formed for the mission and Wg Cdr Guy Gibson was given just three weeks to assemble the air crews and ground support staff he needed. Then followed eight weeks of intensive low-level flying training.

Nineteen specially-adapted Lancasters took off on May 16, carrying 133 airmen. We lost eight Lancasters that night – 53 young airmen were sadly killed. Sadly this was not uncommon during the Second World War where we lost more than 55,573 young men in Bomber Command alone.

The mission was top secret, with only the highest ranking officers aware of its intended target before the men were briefed on the evening of May 16.

The crews were dispatched in three waves, each targeting a different dam. Although the raid was widely reported as a success, this was tempered by the significant loss of life, something which Barnes Wallis himself deeply regretted. Those crews which were lost were shot down by anti-aircraft fire or crash landed after hitting power lines.

Upkeep was a 9,000 pound cylindrical mine that was designed to bounce across the surface of the water until it hit a dam. It would then sink and a hydrostatic fuse would detonate the mine at a depth of 30 feet.

In order to operate effectively, Upkeep had to have backspin imparted on it before it left the plane. This required specialist apparatus that was designed by Roy Chadwick and his team at Avro, the company that also manufactured the Lancaster bombers.

The press reported the operation as a great success, though for many involved in the raid, and particularly Barnes Wallis, this was severely tempered by the loss of life in 617 Squadron. Wallis wrote that: “For me the subsequent success [of the raid] was almost completely blotted out by the sense of loss of those wonderful young lives.”

A Dropbox where images will be available after the event: http://bit.ly/Dambusters-75