Actor, Christopher Timothy, star of All Creatures Great and Small, Doctors and Eastenders, recently visited Worthing-based charity, Care for Veterans, to show his support for a former Royal Engineer who is undertaking an epic static cycling challenge to raise money for the charity. 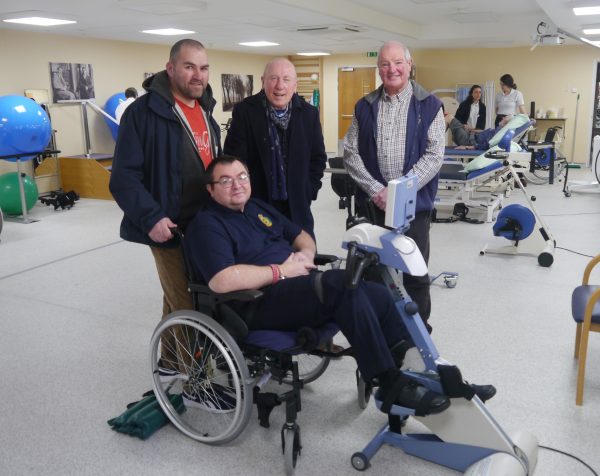 Five years ago, Warrant Officer, Steve Boylan, returned home from a second tour of duty in Afghanistan. However, whilst riding his beloved motor bike, he was involved in a near fatal road traffic accident that changed his life forever. He suffered a massive brain injury which paralysed one side of his body and left him with speech and memory difficulties. Aged just 39, Steve went from being an action hero and keen sportsman, to suddenly being unable to walk and confined to a wheelchair. 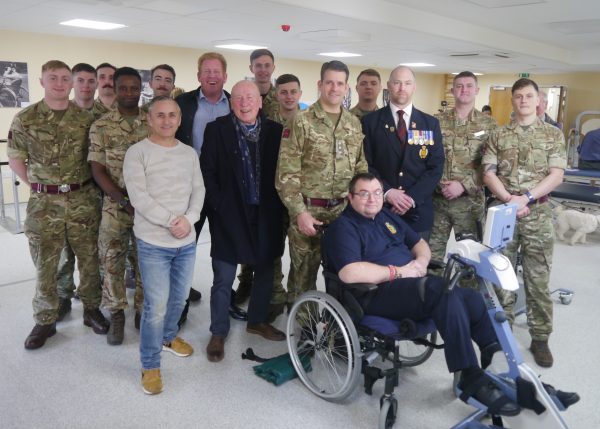 After three years in different hospitals, Steve arrived at Care for Veterans in Worthing in December 2018. It is here that he has been receiving regular physiotherapy which has given him a new determination to try to learn to walk again, and his goal is to walk five paces on his own by Christmas. In his physiotherapy sessions, Steve uses a static cycle to build strength in his legs. He has set himself a challenge to cycle the 874-mile distance from Land’s End to John O’Groats in order to raise money for the charity.

Steve was amazed recently when he received a visit from TV actor Christopher Timothy who, when supporting the charity at an event at Arundel Castle last year, found out about Steve and his challenge. Christopher says,

“I heard about Steve and how badly he was injured and was amazed to find out that he has taken on this epic challenge. I just had to meet him and let him know how much I admire his courage and determination and wish him the best of luck with this initiative.” During his visit to Care for Veterans Christopher also visited the physiotherapy and social and recreation departments at the charity, and met many of the disabled veterans who call Care for Veterans their home.

“I’ve always supported our Armed Forces and was only too happy to support this local charity that cares for our disabled veterans, young and old. You really have to visit the facility to appreciate the amazing work that they do and what a happy place it is. The veterans there are receiving fantastic care and rehabilitation and it was great to meet Steve and see him cycling away with such determination. He has so far cycled the number of miles from Land’s End to Preston, Lancashire so is almost half way and I know he’ll reach his goal. I’m 100% behind Steve and hats off to him for taking this on and raising money for this fantastic charity.”

When Christopher visited, he met some of Steve’s Royal Engineer colleagues who were also visiting to show support for their friend. Steve’s Dad, Peter Boylan, said,

“It was great to see Steve with his former Royal Engineers and we can’t thank them enough for all their encouragement for Steve’s challenge. Also how kind of Christopher Timothy to support Steve and give his time to come and encourage him. This challenge is a major one for Steve, due to the severity of the injury to his brain which has greatly affected his movement, memory and speech, however with such amazing support and with his determination to succeed, I know he will complete the challenge and raise much-needed funds for Care for Veterans who have given Steve the ability and confidence to take all this on.”

Steve’s friend and former colleague, Captain Dave Curry, has helped set up the challenge for Steve, including his online fundraising pages, and has also put together a plan of Steve’s route, indicating targets for him to meet each month throughout this year. He explains,

“A good Royal Engineer proverb is ‘always be prepared to improvise, adapt and overcome.’ I reminded Steve of this to encourage and motivate him, not only for this challenge, but for all of his rehabilitation. Before his injury, he had completed charity challenges, so it’s great that this gives him the opportunity to take on another, and to give something back to Care for Veterans, which provides such amazing support for Steve.”

During the visit the Royal Engineers and Christopher Timothy met other veterans at the charity including Second World War veterans Len and Peter and ex-RAF Servicemen Richard and Tony.

Steve hopes to raise £874 from this challenge – £1 for each mile cycled. You can show Steve your support by visiting his JustGiving page at www.justgiving.com/fundraising/david-curry4steve-boylan