Where: Starting at Colchester Baptist Church then moving onto Colchester High Street 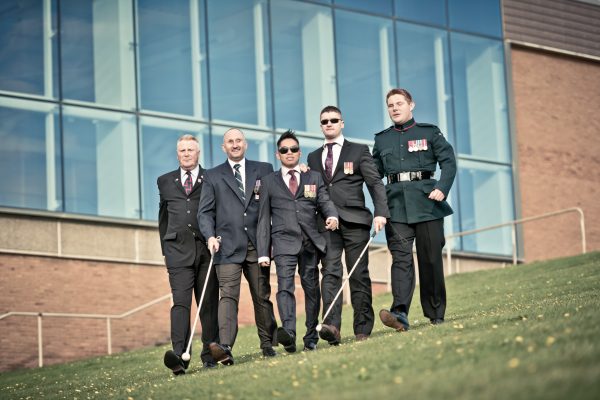 Twelve blind veterans from East Anglia will showcase achieving victory over blindness next Thursday as they support each other to walk one mile down Colchester High Street, as part of Blind Veterans UK’s ‘March for Veterans’ awareness month.

Blind Veterans UK have dedicated the month of March to veterans with fundraising challenges including a 100 mile virtual walk and 10 mile physical walks dotted around the country on March 30.

With mobility being a key challenge that comes with sight loss, the one mile walk on March 28 enables blind veterans from East Anglia to fully partake in ‘March for Veterans’ and showcase achieving victory over blindness at the same time.

By navigating Colchester High Street’s mixed urban terrain of uneven flagstone pavement, an assortment of physical hazards and auditory sensory overload, the blind veterans will be able to feel the same sense of achievement as supporters taking on the 100 mile and 10 mile walks.

As a historical gesture to past blind veterans and comrades in arms, the men will begin the walk hand to shoulder, a method used during the First World War to evacuate those blinded during combat in the trenches and recently immortalised in Blind Veterans UK’s bronze sculpture located outside Manchester Piccadilly Train Station.

The twelve vision-impaired ex-Service men, who served in a variety of regiments and roles, hail from an assortment of communities across East Anglia including Colchester, Basildon, Walton-on-the-Naze, Felixstowe, Ipswich and Bury St Edmunds.

The men, who will be wearing blazers, berets and service medals, will be supported by six serving soldiers from the Army 16 Medical Regiment and Blind Veterans UK staff and volunteers. As they move down Colchester High Street, they will be accompanied by Colchester Pipes & Drums, giving the veterans focus and allowing them to take every step with pride.

Liam Harold, 80-year-old Parachute Regiment veteran from Walton-on-the-Naze, Essex, is one of the blind veterans taking part. He says: “It’s going to be a big challenge that’s for sure, as I don’t know Colchester at all and I’m nearly completely blind. As long as I have my white cane and my brothers in arms guiding me, it’ll be fine. My two metal knees mean it’s going to be extra tough but I’ll feel a huge sense of accomplishment when we complete the route.”

Blind Veterans UK launched ‘March for Veterans’ with the aim of increasing awareness of the isolation faced by blind veterans up and down the country every day. Many go for days or weeks on end with no one to speak to or help them perform essential tasks like food shopping and reading post.

Jennie Hammond, Community Team Leader for Essex, says: “These men, who have an average age of 74, should be immensely proud of what they’re about to achieve. Just imagine not being able to see and the challenges that you’d be faced with. By supporting each other to navigate one mile on a chaotic high street, these twelve men will be achieving something amazing not only for the charity but also for themselves.”

Blind Veterans UK currently supports more blind veterans than ever before in the charity’s history, but it knows there are many more who still need its support to rebuild their lives following their sight loss. The charity has dedicated community teams throughout East Anglia who provide support including training, equipment and social events for vision-impaired ex-Service men and women in their local area.

By @Cobseo 26 minutes ago