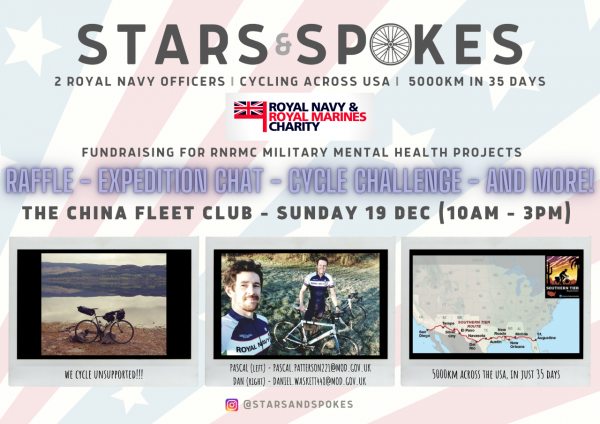 In preparation for a mammoth expedition in July 2022, when two serving Royal Navy officers will cycle 5,000km unsupported across the USA, the team will be in training and raising awareness at China Fleet Country Club this weekend.

The cycling duo will be helping to prepare with an all day cycling event, giving members and visitors to the Club the opportunity to meet them, find out more about next year’s challenge and their plans.

“We’re really looking forward to welcoming Pascal and Dan to the Club ahead of their challenge next year.  The money raised from this Sunday’s event and next year’s cycle expedition will go to the very worthy Royal Navy & Royal Marine Charity to support military mental health.”

“China Fleet already works closely with the Royal Navy & Royal Marines Charity and we are so proud to be supporting Dan and Pascal,” added Debbie.

The team, called STARS & SPOKES will be cycling from California to Florida, in just 35 days in July 2022.  Expedition Leader Cdr Pascal Patterson RN (40) and fellow cyclist Lt Cdr Dan Waskett RN (39) joined the Royal Navy on the same day in 2005. Both have completed multiple frontline flying tours as Aircrew Officers, in hostile environments such as Afghanistan, Somalia, West Africa and the Gulf. It was during these tours that the pair fully realised the huge importance of mental health.

Starting in San Diego, this epic ride east will take them across deserts, over mountain ranges and through hurricane zones. They will average 170 km a day and carry all of their equipment on the bikes.

“We will be entirely self-sufficient, there is no support team,” Cdr Patterson said. “It will be us against the elements, for 8 hours a day”.

The mammoth cycle is an opportunity to showcase the fantastic physical development capability that exists within the Royal Navy. Helping them prepare for the ride are personnel from the Institute of Naval Medicine (INM), who will provide expert sport science, nutrition and training programme guidance.

“The Royal Navy is all about the team effort,” Lt Cdr Waskett said “Whether on deployment or during an expedition, the same applies.”

“The mental health of our personnel is so important, we are passionate about getting the necessary support to those who need it”, Cdr Patterson said. “Help us, to help others”

The team will be cycling from 10am to 3pm on Sunday 19th December within China Fleet Country Club’s Reception.

“Come along and support them and find out more about their expedition, training and help support the charity.,” added Debbie.

Follow them on their training journey, and the expedition itself, at www.starsandspokes.com and on Instagram @starsandspokes. To support them in their efforts head to www.justgiving.com/starsandspokes, all funds raised go directly to the RNRMC.