The tragic death of Sapper Bradley Parks in 2019 has been the inspiration for several fundraising events for SSAFA, the Armed Forces charity and the latest has been with motorcycle group 365 Warriors. More than £660 raised by 365 Warriors will go to the Staffordshire branch of SSAFA. 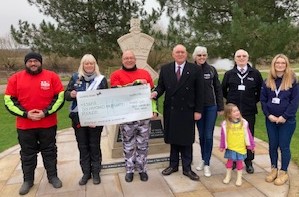 Bradley served in 26 Engineer Regiment, part of the Royal Engineers, based in Tidworth and was diagnosed with bipolar in April 2019, just three months before he took his life. He was in the process of leaving the Army after four years’ service and would have been discharged in February 2020.

John and Rachel Parks – Bradley’s parents – have been raising awareness about mental health and help others who are suffering by supporting SSAFA. Their good friends Mark Pearman and Lydia Holmes, who run 365 Warriors, have supported them in this and with earlier two-wheeled fundraising activities.

Lydia said that 365 Warriors took groups of bikers out on rideouts into the Peak District and surrounding areas, charging £5 per bike, with many donating more. Mark and Lydia, who run M & L Detailing, gave £5 to SSAFA from each bike cleaned. They also held a fun day at a local pub and an auction on Facebook, and sold bike decals and cups, all adding to the generous tally.

“We’re a charity bike group, and we raise money for good causes by doing what we love: riding our motorbikes, because bikes are our passion and our life.”

“The tragic death of Bradley, a young man who became a Sapper to serve his country, has touched the hearts of many in the Forces family, and outside it, around the country. On behalf of SSAFA Staffordshire, I am extremely grateful to Lydia and Mark, 365 Warriors, and all those bikers and others who supported this fundraising drive in Bradley’s name.”