A team of Armed Forces veterans have returned from a week long trip to Gibraltar, where they have helped restore Lord Airey’s Battery which sits on top of the iconic Mediterranean rock. 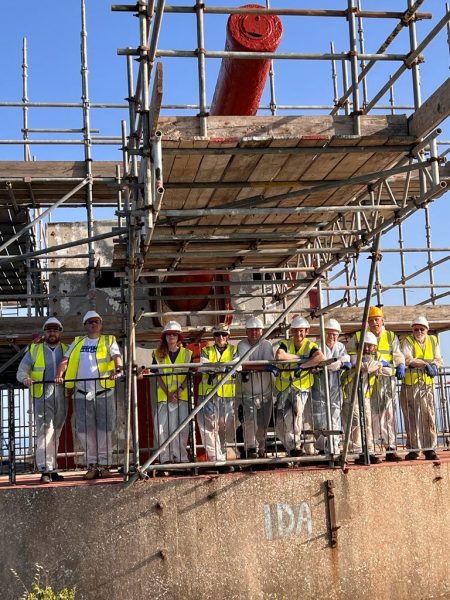 The team are from Alabaré, a UK charity supporting vulnerable veterans and those who have experienced homelessness since leaving the military.  Alabaré runs homes, mental health support services and social enterprises dedicated to supporting veterans back into healthy, independent lives.  Five members of the team have recently benefitted from accommodation and support provided by the charity.

Several member of the team have served in Gibraltar or spent time there during their military careers.  The heritage project was an opportunity to give back to the people of Gibraltar and thank them for their continued support of the UK Armed Forces.

Sitting above the territory, Lord Airey’s Battery is an iconic element of Gibraltar’s heritage, having been built by British troops in 1891 and seen service throughout both World Wars. Since being decommissioned 1976, the gun has  fallen into disrepair and is now the subject of a renovation project spearheaded by military historian Pete Jackson, Trustee of the Gibraltar Heritage Trust.  The Alabaré team worked under Pete’s guidance for 5 days, significantly moving the restoration forward and helping to preserve this piece of militaria for years to come.

Royal Navy veteran Kenny Brown was one of the team who took part.  He said;

“I came out here with Alabare to help restore Lord Airey’s Battery.  I’ve been working on the gun and some of the components that have been a bit lower on the rock. It’s been a fantastic week. It’s been a hard week with hot weather but we’ve all pulled together. For me it’s been a some good closure… I first came to Gibraltar in 1998 as a young 17 year old on HMS Cornwall and I am now back in Gibraltar as a 41 year old and it’s given me that bit of closure from my own battles and demons.  It has allowed me to rediscover my own personality with a group of veterans again. So thank you to Alabare for letting us come out here and to the Gibraltar Heritage Trust and the organisations who helped make this trip possible.”

Karen Langley is member of the Alabaré team. Karen served 12 years with R.E.M.E as an A Mech.  She said;

“It’s been great coming together as a team with veterans.  When veterans come together there’s lots of banter, lots of laughs and it’s been really good.  Everyone has been so positive we’ve been working so hard every day but there are still smiles on everybodies faces.”

Andrew Lord is the Chief Executive of Alabaré and he joined the group in Gibraltar.  As the week came to a close he reflected on the achievements of the project team.  He said;

“Over the last week the team have been working on Lord Airey’s battery, stripping back the rust, rubbing it down, and before painting it in red lead, and then the final battleship grey as well.  The team have worked incredibly hard on this late victorian artillery battery.  The team have really gelled with lots of camaraderie, and it though these moments, and the comments of the veterans that you can really see how beneficial this kind of shared endeavour is, building confidence and positive mental well-being.”

“This project has come about thanks to the hard work of many – and I want to pay particular tribute to Pete Jackson and all his support, in both developing the project and then setting the tasks for us to do this week.  It’s also come about the very generous support of Friends of Gibraltar Heritage Society  and the Gibraltar Heritage Trust, plus the many other charities have supported this initiative –   Greenwich Hospital, The Not Forgotton, Wilton Rotary, Rebecca Day and others as well.  It’s been a great project.”

The Alabaré Gibraltar Heritage project was held alongside the charity’s Race to the Sun sponsored cycle ride which saw 12 riders complete a 500km route from Gibraltar across southern Spain, conquering ascents totalling over 8,000m.  Each cyclist was raising funds to support Alabaré’s Homes for Veterans.