You are here: Home / News / News / UK veterans sail to victory in ‘Ashes on the water’

UK veterans sail to victory in ‘Ashes on the water’ 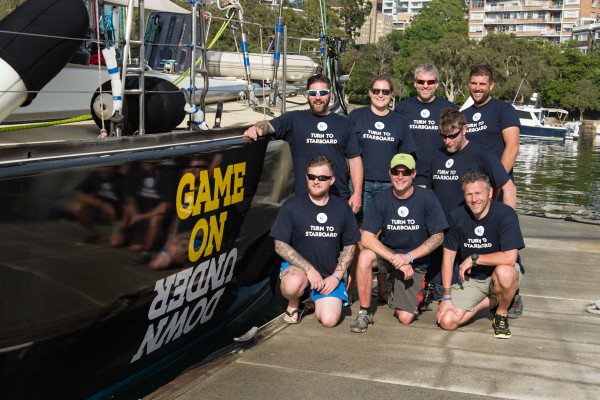 UK veterans preparing to board the Invictus Games Sydney 2018 GAME ON (CV10) yacht in Sydney, Australia.

A crew of wounded veterans has led the UK to victory at an iconic yacht race billed as the ‘Ashes on the Water’.

Eight wounded, injured and ill UK veterans joined a UK crew to take on the Australian’s in the Rolex Sydney Hobart Yacht Race on Boxing Day.

The UK crew crossed the finish line almost 11 hours ahead of their friendly rivals in the race from Sydney to Hobart in Tasmania and finished in 49th place overall. Sir Robin Know-Johnston, the first man to sail solo, non-stop around the world in 1969, joined the UK crew as their on-board navigator.

Upon arriving into Hobart, Sir Robin said: “It was a great race and probably my best Sydney Hobart so far. I think it was a really fast race and we had a great Skipper, great crew, great mate and we got the tactics right.”

Further celebrations took place after the UK team were also presented with the “Oggin Cup”, awarded to the quickest Armed Forces yacht on corrected time.

Clipper Ventures, organisers of the Clipper Round the World Yacht Race, has been working with Invictus Games Sydney 2018 and Help for Heroes to give wounded, injured and ill UK and Australian veterans the opportunity to take part in the iconic race. The race helps to form part of their rehabilitation as they use the healing power of sport to move forward in their recovery. It also provided an opportunity to highlight the fourth Invictus Games which will be held in Sydney in October 2018.

The UK crew included staff and beneficiaries from Cornish sailing charity, Turn to Starboard. Ashley Bowes, a war veteran suffering from post traumatic stress disorder, was selected to take part in the Sydney Hobart race. After two tours in Iraq he left the Royal Logistic Corps in 2007 but battled with depression before being diagnosed with PTSD.

During his treatment he was introduced to the charity Turn to Starboard – which helps injured veterans by take up sailing. Last year he completed a grueling 2,000-mile Round Britain Challenge with the charity along with 16 other veterans who had little or no experience of the sport.

Ashley, 31, said after his maiden voyage he felt at home on the water and was ready to take on the Australians. He said: “I’m hooked on sailing for life now. Sydney Hobart was difficult and challenging but when I am out on the water, the true me comes out. I feel no pain and there are no devils out on the oceans – it is truly a magical place to be.”