You are here: Home / News / News / Update from the Cobseo Chairman

Update from the Cobseo Chairman 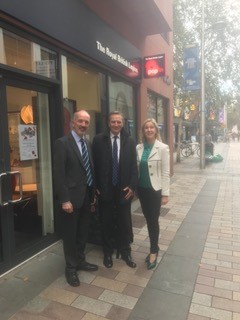 On Tuesday I travelled to Belfast to meet with the Chief Executive of the RFCA NI to gain a better understanding of the work being done to support Veterans and their families in Northern Ireland. Cobseo operates in Northern Ireland through Liz Brown, the Covenant Programme Manager in the Northern Ireland Veterans Support Office, who has been working hard since her appointment to generate a huge amount of interaction and cooperation throughout the Province. I also visited AA Veterans Support and met the founder Andy Allen, a veteran with personal experience of recovery. The charity started operating in 2011 and has made impressive progress in providing training and support tailored to veterans’ needs. We had a very productive conversation looking at how Cobseo could provide more training and support in NI, and I look forward to working with the Cobseo office to develop these ideas in the new year.

In wider team news, Director of Operations Ian Caws finalised observations on behalf of the sector for the Armed Forces Covenant Annual Report and attended the Veterans Gateway Stakeholders Group meeting with Charlotte Fiander, Head of Communications, this week. Charlotte has continued meeting with Members as part of her induction and attended the Welsh Assembly Armed Forces Covenant Conference on behalf of Cobseo in Cardiff last week.