You are here: Home / News / News / VE Day to see nation celebrate like never before

VE Day to see nation celebrate like never before

While the country remains in lockdown, the nation will come together in ways never seen before to mark the 75th Anniversary of VE Day. Leading Armed Forces charities Legion Scotland and Poppyscotland, together with the Scottish Government, military and the BBC, have put together a revised programme of activities that will ensure this important milestone is marked in spectacular fashion. 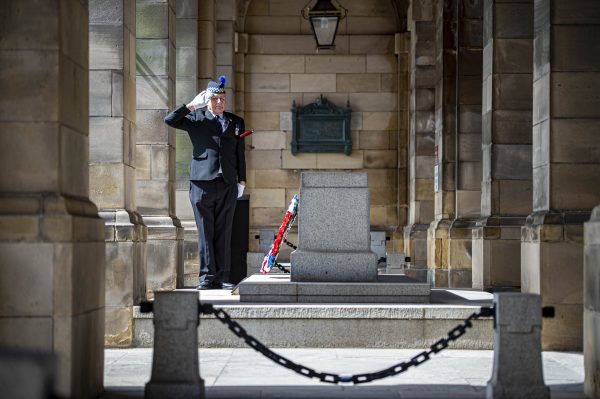 “It is vital that the generation who sacrificed so much is commemorated and celebrated today. Together with Poppyscotland and the Scottish Government, we have worked tirelessly over the past few weeks to adapt the plans for the 75th Anniversary of VE Day.

“While the current restrictions has forced us to postpone the planned programme of formal events in Edinburgh, we believe the new ‘virtual’ programme is equally exciting and will bring the nation together in a truly unique way, while keeping everyone safe at the same time.”

The revised programme of official activities begins at 0800, when serving military personnel and Reservists at bases across Scotland will lead a collective salute to the heroes of the Second World War. Also joining the salute will be members of Legion Scotland, cadets and members of the public, who have been encouraged to take to their doorsteps to salute. Those taking part are being invited to share pictures and video footage of their salute on social media using the hastags #VEDay75 and #HeroesOfWW2.

At 1039 precisely, Legion Scotland and Poppyscotland will begin broadcasting a live, virtual service of remembrance on their respective Facebook pages (www.facebook.com/LegionScotland and www.facebook.com/Poppyscotland). The service will be conducted by National Padre Karen Campbell and will include a two-minute silence. Legion Scotland National President Sir Alistair Irwin will read Binyon’s Lines and a single wreath will be laid at the Stone of Remembrance, in Edinburgh. Martyn Hawthorn, the National Chairman of Legion Scotland, will recite the Kohima Epitaph and Legion Scotland’s own Amy Hawthorn will sing a hymn along with the Choir of Marchmont at St Giles’.

At 1200, a further live broadcast will be made via the charities’ Facebook pages. An-hour long virtual tribute concert will feature performances from many of the artists who had been due to take part in a free open-air concert in Princes Street Gardens to celebrate VE Day. Due to the current restrictions this had been postponed, but the virtual concert is expected to reach tens of thousands of followers.

During the afternoon of VE Day, households across the country will to celebrate the milestone day at “virtual” VE Day parties, which have been organised by Poppyscotland. Popular video call platforms such as FaceTime, Zoom and Houseparty will allow family and friends to rediscover spirit of 1945 while still observing Scottish Government guidelines on social distancing.

BBC One has a series of commemorative programmes being broadcast throughout the day. At 1445 they will broadcast Sir Winston Churchill’s famous victory speech in which he addressed the nation to announce the end of the war in Europe. Then, at 2000, a special hour-long programme entitled ‘VE Day 75: The People’s Celebration’ will share some remarkable Second World War and VE Day stories, told by those who lived through this period. The line-up also includes contributions from Katherine Jenkins, Adrian Lester, Anton Du Beke, Shane Richie, Emma Barton, Beverley Knight, Helen George and Sharon D Clarke. At 2100, HM The Queen will address the nation – the precise time her father spoke to the nation three quarters of a century ago.

“On VE Day it is both a time to reflect and remember those who made the ultimate sacrifice during the Second World War and celebrate the moment that victory in Europe was finally achieved after six long years of war. We hope everyone in Scotland can find a way to get involved in the programme of activities today.

“It is also important to remember that while VE Day was cause for celebration, the war in the Far East continued for many months. That is why we are also working on plans to ensure the 75th Anniversary of VJ Day in August also receives due recognition.”