Veteran Bill Lawson from Ilminster in Somerset is celebrating his 100th birthday. 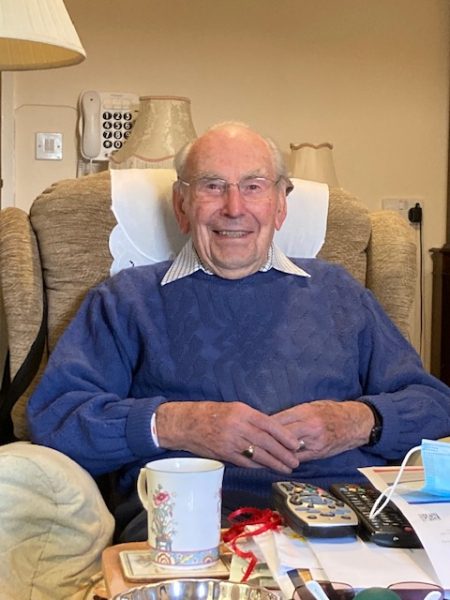 On 31 December 2020, Bill Lawson celebrated his 100th birthday but not quite in the way he might have planned, due to pandemic restrictions. Widower Bill has two sons, two grandchildren and two great grandchildren but they are in Tier 4, so unfortunately cannot celebrate his 100th with him.

“Bill really enjoys life. He still manages to meet up with friends for a coffee (socially distanced, of course) in the town where he lives, and I am quite sure his great sense of humour has got him through this strange year.  He cannot believe he is going to be 100 and finds it sad that he will be unable to celebrate this important birthday with his family.”

An RAF veteran, who served in Africa, Bill joined The Taxi Charity for Military Veterans trip to Berlin with his son Eric in 2019, on a three-day visit to commemorate the Berlin Airlift. The visit included going to the British Embassy for tea and visiting the Brandenburg Gate, Checkpoint Charlie, and the Berlin Wall and attending a Berlin Airlift memorial service at Tegel Airport.

“Bill’s love of life and intelligent conversation made him a key part of the Taxi Charity’s trip to Berlin as guests of the British Embassy and the German Ministry of Defence.  The 70th anniversary of the Berlin Airlift commemorations were very important to Berliners and they were clearly delighted to be able to host such an important veteran as Bill.”

When Bill left the RAF he went back to his job in local Government. His hobbies are reading biographies and he has had plenty of time to do that during 2020!

If you know a veteran who might enjoy being part of the Taxi Charity family, please visit www.taxicharity.org