The Taxi Charity lost another of its family earlier this month when WWII veteran Harry Bailey, who was to many the face of the charity, died in hospital, surrounded by his family 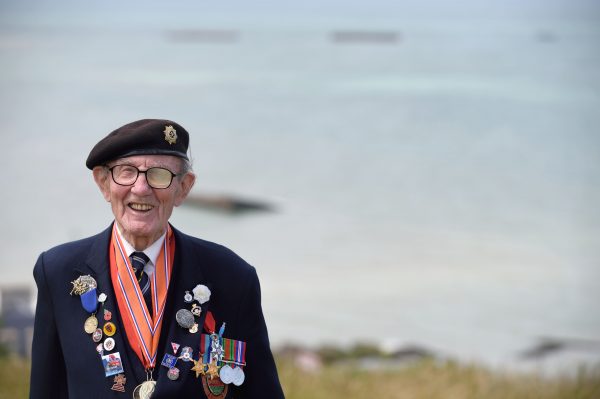 WWII veteran Harry Bailey, 99, from Lewisham, was a huge part of the Taxi Charity family. He was equally loved by the veterans the charity supports and the London cabbies who volunteer their time to take the veterans on trips across Europe and the UK. Harry was a regular on all the trips and he will be greatly missed by all.

During the Second World War Harry was in The Royal Army Service Corps and worked on the Mulberry Harbour as part of the D Day Landings.  He was presented with the Legion d’honneur in 2016, while in Normandy with the Taxi Charity.

Harry was well known  for his love of raising funds for the charity and Frans Ammerlaan who helps to coordinate the charity trips to The Netherlands recalls,

“If Harry could see an opportunity to shake his collection bucket and raise some money he would. We welcomed Harry many times to The Netherlands and I will never forget the moment he rattled the collection bucket in front of our Defence Minister at Wageningen! Rest in Peace Harry, we are going to miss you.”

A lifelong Millwall supporter Harry was a widower and leaves behind a daughter Anne.

Veronica and the team from Millwall Football Club said,

“I’ve known ‘Sir Harry’  since he first graced our club with his wonderful charm and funny sense of humour 10 years ago. I remember him fondly chasing me around the building for some match tickets as he was such a big fan. Harry was a kind and inspirational gentleman. My staff and I will miss him very much from the annual visit to The Den with the  wonderful Taxi Charity but will always remember him with so much fondness. Rest in Peace dear Harry. Lost but never forgotten. Deepest sympathy to all Harry’s extended family and friends. Thoughts and prayers are with them.”

“Many of us will have cried on hearing the news about Harry passing away. To me he was family, and his passing will leave a massive hole that will never be filled. Goodbye my friend.”

“Harry had a very special place in the hearts of everyone at the Taxi Charity. He was our ‘Collector Extraordinaire’ and to many was the  face of the charity. Wherever we were, either in the UK or abroad, Harry would always take any opportunity to shake a collection bucket. In 2019 we had a special Taxi Charity collectors’ jacket and his own collection bucket made especially for him with his name on it. He was an avid Millwall supporter, and I remember when he was introduced to the actor Ray Winstone, a West Ham fan, they shared some banter about the rivalry of the two teams. There are so many fabulous stories about Harry that we could talk about him for hours. He will be greatly missed.”