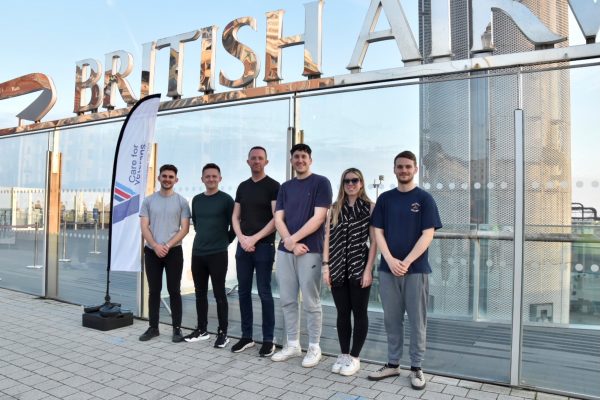 Two groups boarded the iconic viewing tower, the first at 7pm and then the second at 8.40pm, rising to 162m above Brighton before descending from the top to cheering spectators below.

The funds raised from the challenge will support Care for Veterans, a Worthing-based charity providing care and rehabilitation to ex-service personnel from all over the UK.

Aaron ‘AJ’ Card was the first to sign up for the challenge and was the first to jump. He is an ex-Royal Engineer from Milton Keynes who left the army in 2012 and now runs ‘AJ Fitness MK’ and ‘Corporate Fitness and Wellbeing’. He said:

“When I heard about some of the amazing things that Care for Veterans has done for some of its patients, I was blown away and wanted to know what I could do to support.”

Talking about his experience, he said:

“It was good fun, and it was a nice view all the way around Brighton. When I got up to the top, I thought I might be a bit scared, but when I did it, I was fine! It was quite slow and smooth coming down, so not too much to worry about.”

Toby Pawson, a Paralympian from Epsom, Surrey, was second out of the 162m-high pod. A charity ambassador for Care for Veterans, Toby shares a connection with some of the veterans the charity supports, as he was just 18 months old when he suffered brain damage. He said:

“It was terrifying coming out, but fun after about halfway down. I am honoured to be associated with this great charity. These Servicemen and women have given their all for this country, and it feels good to be able to give something back.”

Other participants included a group of six from Britton and Time Solicitors, Hove, who raised £3,000. Also taking part was David from Bluecoat Wealth Management, Lower Beading, who is a veteran who suffered an injury serving in Afghanistan. The youngest participants were brother and sister, Matthew (16) and Robyn (14) Preece. A group of three from ABN AMRO Commercial Finance presented a cheque for £1,275. Rebecca and Megan from Back 2 Balance Spinal Health Clinic, Hove, took on the challenge and raised £1,200.

“We are thrilled with how this event went and how much our supporters have been able to raise. All proceeds will support Care for Veterans to provide a comprehensive and high standard of care to help physically disabled veterans achieve their rehabilitation goals. The £15,000 raised from this event would pay for five weeks of physiotherapy to help individuals regain independence and improve their quality of life. Thank you so much to everyone who took part in the event; we hope they can take pride in knowing they are making a difference to veterans who are facing the toughest challenge of their lives.”

Care for Veterans specialises in helping those with an Acquired Brain Injury (ABI) or a degenerative neurological condition, such as multiple sclerosis, motor neurone disease and Parkinson’s.  The charity receives no regular Government funding and must raise over £1.5 million each year to maintain its nursing and rehabilitation services for ex-Service personnel and their immediate families. It provides services such as nursing, physiotherapy, occupational therapy, and speech and language therapy to help rehabilitate those who live there to live more independent lives.