You are here: Home / News / News / Veterans Enjoy Lunch at The RAF Club

On 23 January a group of veterans were invited to a special lunch at The RAF Club in Mayfair, to thank them for all they do to help raise awareness and funds for The Taxi Charity for Military Veterans. 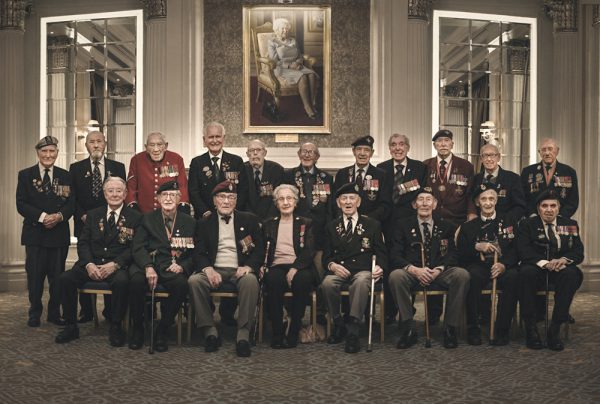 Many of the assembled veterans regularly help at bucket collections at London Underground stations. The money these collections raise ensures the charity can continue to take the veterans; on trips to the WWII commemoration services in France and Holland and days out throughout the South East.

Veterans at the lunch included those who had played their part in D Day: Marie Scott who sent messages to and from the beaches, Bill Gladden who flew into Normandy in a glider carrying eight motorbikes and a tank, Dickie Forrester who landed on the beaches and Frank Pendegast, part of the regiment that took Pegasus Bridge, Roy Maxwell one of the last surviving members of No4 Commando and Harry Rawlins, from the Rifle Brigade, who was awarded the Belgium Croix de Guerre. 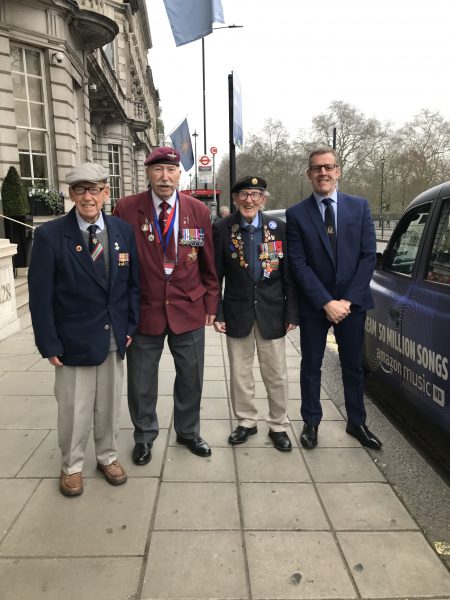 “I have been involved with the taxi trade since 1961 and I have supported this Charity for over 20 years. The Charity does fantastic work to help give something back to these guys and girls who, in the case of the WWII Veterans. were instrumental in giving us the freedom we enjoy today.”

Ian Parsons, Licensed London Taxi Driver and Chairman of the Taxi Charity, welcomed the veterans and thanked them for their continued support and told guests,

“2019 was the busiest and most varied in the Taxi Charity’s history and although the charity is supported through various revenue sources, by far the biggest source of income comes from the sterling work of the veteran collection team. The Charity simply could not have funded all the things they did last year to support veterans, without those men and women who, with medals gleaming, attend collections at London’s Underground Stations, meeting the general public and telling them about what the charity does.”

Veterans are escorted on days out by an amazing group of London’s black cab drivers who volunteer their vehicles and time free.

“It is a real privilege to attend events like these and spend time talking with veterans like Alex Borrie, who was a founder member of the 1st SAS unit spending time in France, Belgium and Germany during WWII.”

“These veterans have some amazing stories to tell and they love coming to help the charity at our bucket collections at the Underground Stations. The respect for these heroes from the general public as they are rushing through the station on their daily commute is always humbling and it is a pleasure to invite them for this thank you lunch at the prestigious RAF Club in Mayfair.”

Having thanked the other charity supporters in the dining room, and after a huge cheer from the veterans for the amazing ladies and gents who drive London’s black cabs and give the charity so much support, The Taxi Charity Chairman, Ian Parsons was delighted to read out a personal note to the veterans, from Prince Harry, The Duke of Sussex.

If you would like to know more about, The Taxi Charity , including volunteering as a Licensed London Taxi Driver, or making a donation to do visit: www.taxicharity.org

To fund and facilitate these outings, the charity is wholly reliant on generous donations from members of the public, businesses and trusts and the amazing group of London licensed taxi drivers who offer their time and vehicles free.
www.taxicharity.org