The Veterans’ Foundation is delighted to announce that the top prize for its Veterans’ Lottery prize draw has been boosted to a record £50,000. 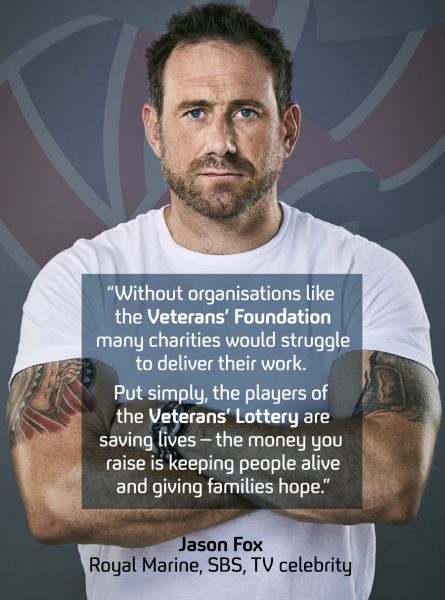 The new prize fund will come into effect for the May draw.

This £50k top prize means that the Veterans’ Lottery has one of the biggest charity lottery jackpots in the UK, giving thousands of you the chance to win big while supporting British Armed Forces veterans in need.

“As the Veterans’ Lottery grows and is able to support more people in need, the top prize also increases in line with official regulations,” explained David Shaw CBE, CEO and founder of the Veterans’ Foundation.

“This is all only possible thanks to your incredible support and we thank all of the players of the Veterans’ Lottery for enabling us to provide grants to over 300 fantastic causes all around the UK – good luck in our first £50,000 prize draw!”

The news comes on the back of the Veterans’ Foundation’s latest announcement that 2022’s first quarterly round of grants to UK-based military charities will total an incredible £1.25 million.

It brings the total support given to Armed Forces personnel and operationally qualified seafarers to more than £10 million since the Foundation’s inception in 2016, providing vital funding to life-changing projects.

Players of the Veterans’ Lottery help to fund schemes addressing mental health issues such as PTSD and depression; treatment and rehab for severe physical injuries; employment and life support for those transitioning out of the Services; and vital help for Armed Forces families.

As part of the growth of the Veterans’ Lottery, but in line with national guidelines governing lotteries, the prize structure is being adjusted to reflect its success.

A Veterans’ Lottery first prize winner scoops the Rollover pot if their lucky extra number printed on their membership card (1, 2 or 3) is a match for the number drawn by one of our two random number lottery machines.

To find out more about one of the biggest and fastest growing charity lotteries in the UK and sign up today, helping British Armed Forces personnel who need our support while being in with a chance to win the huge £50,000 Rollover jackpot, click here: