Four veterans and beneficiaries of The Not Forgotten, a British Armed Forces charity for serving and ex-military personnel, raised over £6,000 for the charity competing in the Half Marathon des Sables in the Canary Islands. 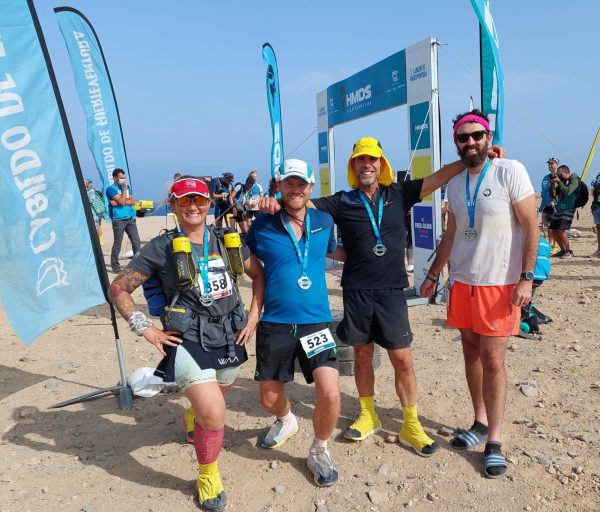 The veterans covered upwards of 100km on this notoriously difficult course, running across volcanic rock, sand and stone during the gruelling event in Fuerteventura which tested their physical and mental endurance to the limits.

‘Team Not Forgotten’ travelled through the desert with all their food, supplies and sleeping goods in a 20L backpack, with only water available at stopping points along their route.

The challenge holiday was prepared for a small group of the charity’s beneficiaries who were looking for a big obstacle to overcome as part of their recovery pathway.

The team were proud to be supporting and raising funds for The Not Forgotten and wanted to give something back for the ongoing help and support they have received from the charity since they left service.

Head of Events and part of Team Not Forgotten, Rosie Thompson, was on hand to support the veterans. She said:

“The veterans all wanted a real challenge. They trained really hard and were ‘dead excited’ to be getting stuck in – some had even been packing their bags for the past month!

“Because of the enormity of the challenge, the Marathon Des Sables is really beneficial for mental health, both in the lead up to the event, and after.

“With mental health, veterans and people in general often want something to look forward to or to train towards – a goal. Even if someone is suffering, they can still have that desire to challenge themselves and get out there.

“This event is all about pushing yourself to make yourself feel better mentally. With the full Marathon Des Sables, they say that you go into the desert with worries, and realise you’ve left them there – that’s the difference a challenge like this can make to you.

“It’s all about camaraderie and that’s what we’re all about at The Not Forgotten. It’s comradeship at its best – elite runners come out to clap you and encourage you and it creates a great atmosphere.”

One of the competing veterans commented:

“This has been the most amazing experience – the week was out of this world and the friends made during the build-up made it such a family feeling and the support we all had made it easier and less stressful.

“I’ve taken up running and it’s my release, the Half Marathon des Sables, was something else and the challenge of the event and the focus of training was such a buzz. Working together with the team to help each other was brilliant. Without The Not Forgotten, I’m not sure where I’d be right now.”