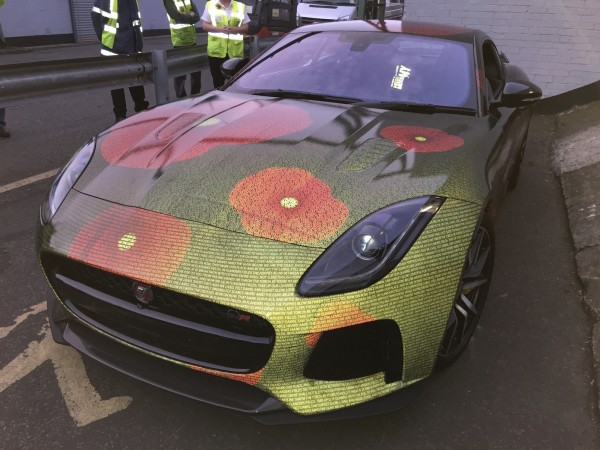 In a joint project between Jaguar Land Rover (JLR) and Mission Motorsport, WIS veterans Chris Read (LCpl RE), Chris Walker (Gdsm IG) and Daniel Elliott (Pte RW) created an extraordinary and striking Poppy design which they have wrapped on a very special Jaguar F Type SVR, rechristened The Poppy Car.  The wrap was done in a state of the art polar reflective material which changes the car’s colour under different light and featured the words of the poem ‘In Flanders Fields’ running through the design.

The Poppy Car also featured on the side of the JLR Castle Bromwich manufacturing plant where the F Type is built and a road going version was the safety car for the 2017 Race of Remembrance. http://www.britishlegion.org.uk/community/news/poppy-appeal/jaguar-poppy-car-en-route-to-race-of-remembrance/