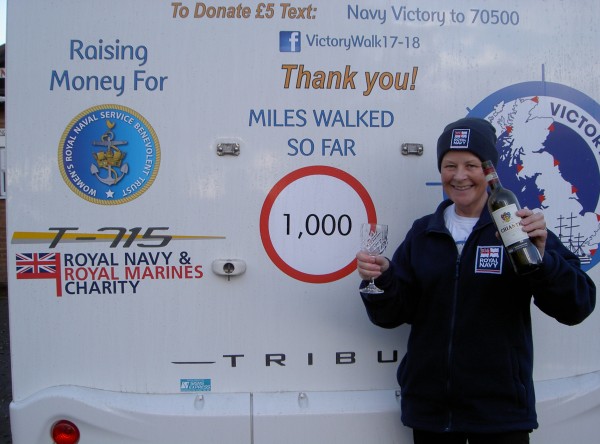 Cobseo members have been previously advised that to mark both her recent retirement from the Royal Naval Reserve and the 2017 Centenary year of women’s service in the Royal Navy, Commander Jane Allen is undertaking a solo 5,500-mile charity walk around the coast of mainland Britain.

After stepping out from Portsmouth, and having now walked 1,000 miles, readers will realise the Victory Walker means business.  I’ve walked hard for the naval charities and am determined to push on for my second thousand – up the east coast, into Scotland. There’s still a long way to go!

So far, the journey through six counties into Lincolnshire has been one of complete contrasts – brash seaside resorts hibernating for winter, the frenetic pace of London, remote marshes, graffiti-daubed industrial estates and quiet villages.

I have passed hundreds of sluices and flood barriers, seeing for myself the ongoing efforts to protect land and property under constant threat from rising waters.  The cultivation of marram grass to restabalise sand dunes, man-made offshore reefs, wooden groynes and vast boulders all help complete the picture of a coast under threat. In some areas, communities seem resigned to the fact their homes and businesses will one day topple over the edge.

We’ve become a ‘warning sign’ nation informing people about every conceivable hazard – most of which would seem common-sense.  I’ve seen it all. From seawall notices that read, ‘sudden drops, slippery and uneven surfaces’ (pretty obvious), ‘CCTV in operation’ (that’s modern life), ‘don’t feed the seagulls’ (you’ll lose your lunch), to the multitude of ‘clean it up’ signs aimed at irresponsible dog owners.

There has also been some frivolity. I’ve walked 19 seaside piers, each with its own style and tale to tell.  The grandeur of Eastbourne, the uncluttered simplicity of Hastings, the charming eccentricities of Southwold and the world record length of Southend have all been conquered.  I have had some tempting proposals too. With no winter ferries, I’ve resisted several offers of private water taxis, opting to walk the full route instead.

On other occasions the going has been tough. Plodding endless miles of monotonous terrain can dampen the spirit: the grassy sea banks of Essex win this prize. In these instances, the walk becomes a ‘route march’ to the end of day marker, with the brain switching to ‘automatic pilot’. And what if my spirits need lifting?  I’ve not been shy in sampling the wares of beach kiosks and little cafes, becoming an expert in spotting a scrumptious homemade Rocky Road!

As expected, there has been a lot of solitary walking, but I’m never truly alone.  When away from humans, I’ve still had flocks of geese, sea birds, wild ponies, grazing sheep or cattle to keep me company.

I’ve steeled myself for some difficult road walking too: hugging a white line, walking in the drainage channel or trying not to twist an ankle on rutted verges with ground brambles waiting to snare my unsuspecting boot.  Crossing the Orwell Bridge on the hectic A14 could have been more enjoyable if I’d not been caught in a hail shower.   Picking my way, 43m above the river on a narrow footpath within a few feet of dual carriageway traffic, separated only by a knee-high barrier, required some nerve.

Living in the confined space of a motorhome, conserving water and battery power, trying to keep warm, finding the motivation to step out into a howling gale, attempting to dry wet clothes, doing route planning on a tiny table, are all daily difficulties. It has also taken personal courage to acknowledge sickness or atrocious weather, and pull myself off the walk for a few days.

Unfortunately, my efforts are not yet producing corresponding levels of donations.  Without doubt, the Victory Walk is proving to be a personal challenge, but it’s more than that. It’s a long-distance charity walk to raise money for two naval charities, the WRNS BT and RNRMC. To those of you who have already contributed – thank you.

I will continue to walk and work hard for these charities.  In return, I would ask that everyone makes the effort to share Victorywalk17-18 on Facebook and use the attached flyer to pass the word to family and friends. To ‘Like’ the Victory Walk is not enough.  Admiral Nelson would have expected many more smiley emojis to be converted into smiley £ signs for the charities’ coffers via www.Virginmoneygiving.com/victorywalk17-18  Thank you!