You are here: Home / News / News / War hero’s son on fundraising mission for Broughton House in his father’s memory

The son of a Royal Marine Commando who fought in the D-Day landings is on a marathon mission to raise money for the veterans’ care home where his father lived for the last three years of his life. 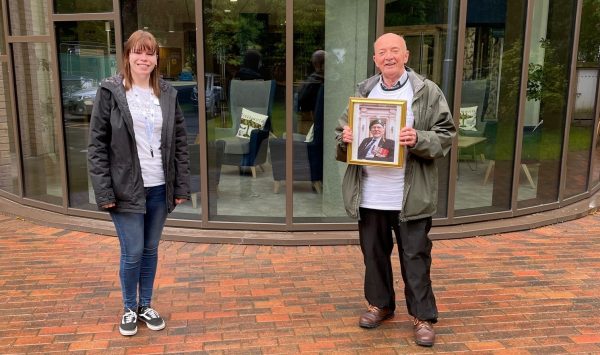 George Simms moved into Broughton House Veteran Care Village in Salford in 2017, two years after his wife Connie passed away. The couple had been together for more than 70 years.

George was injured in a German air attack at Sword Beach during the Normandy Landings on D-Day – June 6, 1945 – and was evacuated to hospital back in England, where he made a good recovery.

The father-of-three passed away in January this year at the age of 97. He left three sons – Allan, Brian and Ken – along with nine grandchildren and 13 great-grandchildren.

Brian, aged 71, who lives in Blackburn, is undertaking ‘George’s Walk’ to raise funds for Broughton House.

Brian’s target is to complete 850 miles – the distance from Land’s End to John O’Groats – before his 72nd birthday in August.

Retired English and drama teacher Brian is chalking up the miles by walking in and around Blackburn. So far, he has completed 570 miles.

“I’ve decided to do this in George’s memory – he loved walking – and as a demonstration of our family’s appreciation for the fantastic care he received at Broughton House. The staff there are fantastic and the residents are lovely.

“My father was very happy and content there. He was taken fishing, went to church, tended the allotments and even enjoyed a visit to Buckingham Palace.

“My undertaking seems to have struck a chord with family and friends across the generations, as I’ve had amazing messages of support from across the UK and from Australia, the United States, France and Spain.

“I hope we can raise a significant sum for Broughton House as a gesture of thanks and to provide much-needed funds so it can continue to provide outstanding care for veterans.”

Donations in support of Brian’s marathon mission can be made via his Just Giving page https://www.justgiving.com/fundraising/brian-simms1.

“Having known George, I think he would have been thrilled at this effort and very proud to have so many people backing this.”