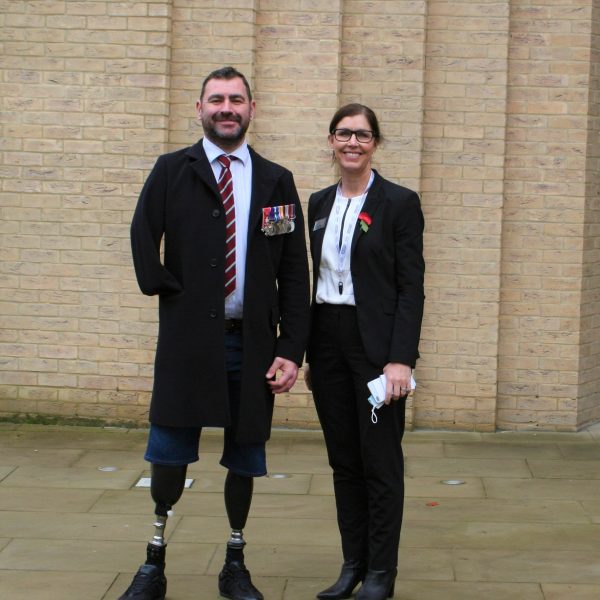 Andy said Broughton House gave him a ‘great feeling’ when he paid a visit and he is keen to help increase awareness of the facility as well to help raise funds.

The 45-year-old from Rainford, near St Helens, said Broughton House does ‘amazing work’ for ‘the Chelsea Pensioners of the North’.

Andy was serving in Helmand Province as a corporal in the 3rd Battalion The Yorkshire Regiment when he stood on an improvised explosive device while on patrol in 2009. He lost his legs and his right arm in the blast but overcame the odds to survive.

Since the horrific incident Andy has dedicated his life to raising awareness and funds for civilian and military amputees.

He has also set up the Standing Tall Foundation, which is based in St Helens. The foundation offers support and programmes for veterans and disadvantaged community groups. Andy’s tireless work earned him an MBE in the 2019 Queen’s Birthday Honours.

“I had heard a lot about Broughton House and the fantastic work they do there caring for veterans.

“I went along for a visit to see for myself and I came away with a great feeling about the place.

“Seeing the high level of care provided for veterans was amazing. They are the Chelsea Pensioners of the North.

“Through my foundation I regularly come across veterans in need and will have no hesitation in promoting Broughton House and all it stands for to them and their families.

“I hope that by being an ambassador I can help to raise the profile of Broughton House and by doing so help them raise funds.”

Broughton House is undergoing a £13m transformation to create the UK’s first Veteran Care Village. The first stage of the redevelopment was completed in September 2020, when veterans moved into a new three-storey building which has 32 residential and nursing care beds over two floors.

The next stage of the scheme is due for completion shortly and will feature 32 residential care and residential dementia care beds and six independent living apartments alongside an Armed Forces Support Hub.

“Andy is an inspiration to the whole Broughton House community. He’s a well-known and respected figure in the veteran community and we are delighted that he has become an ambassador.

“As a veteran himself, he truly understands the ethos of the service family and the role Broughton House plays in supporting and caring for veterans in the north west.

“We look forward to Andy helping to raise our profile and lending his support to us, particularly as we have expanded the range of services we are now able to offer the veteran community.

“His passion and enthusiasm for life are infectious, and it’s wonderful to see him engage with our older veterans. Leading by example, he is motivating many of them to work to overcome some of their own mobility challenges.”