You are here: Home / News / News / Warwickshire blind veteran takes to the slopes for the first time since losing his sight thanks to charity that is “changing his life”

A blind veteran from Warwickshire has been skiing for the first time since losing his sight thanks to Blind Veterans UK, the national charity for vision-impaired ex-Service men and women.

Wayne Perry, 61 and from Rugby, went to Canazei in the Italian Dolomites last week along with 22 other blind veterans as part of the charity’s annual ski trip. 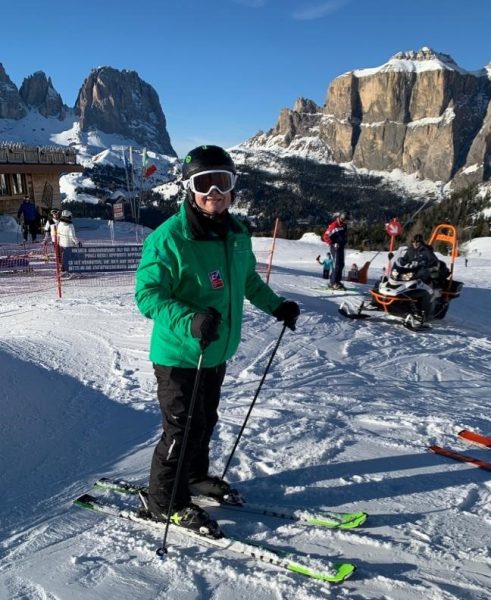 “The ski trip was second to none, I absolutely loved it! It was a great social occasion. The camaraderie and support from everyone was fantastic.

“I’ve been supported by the charity for just over a year now and they have changing my life. I realise now that there are other people in similar situations – I’m not alone”.

Wayne joined the Army in 1975 in the Royal Armoured Corps, serving in Germany, Northern Ireland and the UK. He was discharged in 1993 as a sergeant major. He says:

“During my time in service, I played football for the British Army and for Great Britain in partially sighted football at both junior and senior level”.

He began to lose his sight in the 1980s when he was diagnosed with macular scarring while serving in Germany and now only has a small amount of vision left in his right eye. Wayne says:

“I was told by doctors that the sight loss was temporary and would only last 10 days but it got worse until everything was blurred”.

Before attending the ski trip, Wayne visited the charity’s training and rehabilitation centre in Brighton to meet other veterans who were going on the trip. He says:

Wayne also formed a great bond with his skiing guide, Jonathan. He says:

“He was brilliant with me. I just want to get on with my life and he understood that. He was there when I needed help and let me be when I didn’t”.

It was on the trip that Wayne was introduced to the idea of getting an OrCam to help him with his reading. He explains:

“I was speaking to another veteran and he told me that he uses an OrCam to read letters and other text. It reads the text to you and because it takes me ages to read anything, this type of technology would completely change my life! Blind Veterans UK are going to introduce me to some other technology too that will help me with my day to day life”.