380 children from Asquith Primary School in Morley took part in a fundraising challenge on Friday 30 April and raised £5,155 for Blind Veterans UK, the national charity for blind and vision-impaired ex-Service men and women. 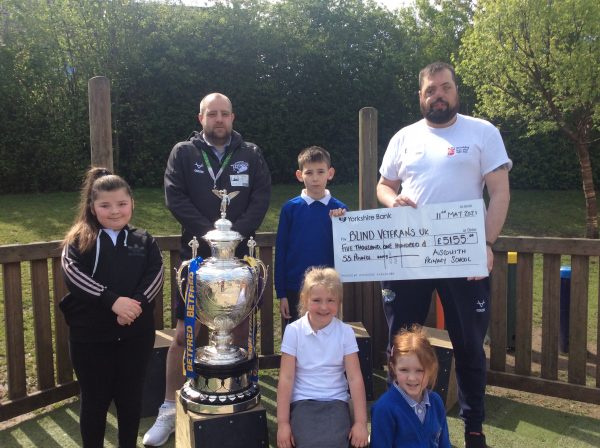 The children each walked or ran a mile to cover the length of Yorkshire. Head Teacher Gillian Austerfield says:

“The school did the challenge to get behind our local hero Simon Brown, who is supported by the charity. He has been an inspirational friend of the school for several years and he is also a past pupil of mine!”

Gillian taught Simon at the very start of her teaching career and has always kept up to date with what he has been up to. Gillian says:

“I saw Simon on the local news talking about the Land’s End to John o’ Groats challenge that he is doing. As he was walking the length of Great Britain, the children decided to walk the length of Yorkshire!”.

Simon Brown, from Morley and who is supported by the charity Blind Veterans UK, has recently completed the 1,406 kilometres walking challenge alongside two of his Leeds Rhinos Physical Disability Rugby League (PDRL) teammates, as well as another friend. They started the challenge on March 1 and finished on May 7, VE Day. Simon says:

“As local lads it’s a real privilege that the kids see us as positive role models. We have been proud of what we have achieved as a team and it’s great that the kids are getting active and doing something poignant and fun to support the Limping Rhinos and Blind Veterans UK”.

Simon joined the Royal Electrical and Mechanical Engineers in 1997. During his career, he worked as a vehicle mechanic servicing and maintaining Army vehicles, serving in Germany, Kosovo, Poland, Canada and Iraq. He was blinded by sniper fire while on a recovery mission in Basra in 2006.

Simon visited the school to support the pupils on the day of the challenge. He was invited back to the school alongside his teammate Dan to receive the cheque. Head Teacher Gillian says:

“The support from the parents has been amazing”.

You can still support Simon in his challenge and make to donation, please visit: https://bit.ly/3u2i9jt