You are here: Home / News / News / Widnes blind veteran to take on 22-mile walk along D-Day beaches for military charity 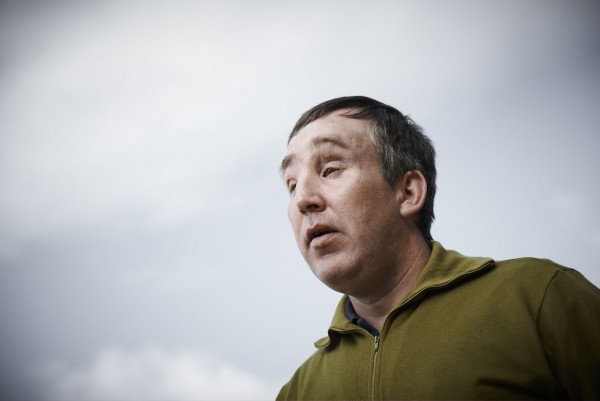 A blind veteran from Widnes is currently training for a 22-mile walk along on the Normandy coastline to commemorate the anniversary of D-Day.

Carl Adamson, 44, will take part in the event alongside five other blind veterans supported by Blind Veterans UK, the national charity for vision-impaired ex-Service men and women. The challenge will take place on 6 June, the anniversary of the 1944 Allied invasion of occupied France.

Carl says: “I’ve been training on the North Wales costal path, which I think should put me in good stead for the Normandy beaches. As a veteran myself it’s going to be very poignant walking in the footsteps of those brave men who risked their lives of the beaches of France, and I’m hugely honoured to be taking part.”

Carl joined the Cheshire Regiment in 1995 aged 21 and lost his sight while serving in Northern Ireland in 1997. Two weeks into his tour he was travelling in an armoured Land Rover when it flipped over at a roadblock, crushing him underneath and causing life-threatening head injuries.

Carl was so badly injured that the emergency services didn’t want to risk moving him by helicopter, so instead he was transported 300 miles across Ireland by road to Belfast, where the consultant said his injuries were the worst he’d even seen in someone that had survived.

Carl has since gone through 14 operations to reconstruct his face. He has no sense of smell, has lost the sight in one eye completely, and has blurred vision in the other.

Of the first months following the accident, Carl says: “I felt like I was alone with no one to turn to and suffered quite severe bouts of depression. When I joined Blind Veterans UK I was at my lowest point. If it weren’t for the charity I honestly don’t know where I’d be.”

Carl, who now lives in Llandudno, has been supported by Blind Veterans UK for more than 15 years. As well as life skills training and equipment to help him adapt to his sight loss, Carl was encouraged to try sports like golf, dry slope skiing and tennis to help him build up his confidence.

Blind Veterans UK provided Carl with the funding to take a sports and fitness qualification, which he now puts to good use as a Sports and Recreation volunteer at Blind Veterans UK’s Llandudno rehabilitation and training centre. A qualified archery instructor, Carl also runs a weekly archery club for the charity.

Carl says: “The life changing support I’ve received has made me determined to give something back, and seeing other blind veterans build their confidence and independence through sports and fitness is incredibly rewarding.”

He continues: “I know that the D-Day challenge is going to be tough but doing it as part of a team with other veterans like myself is something I’m really looking forward to. I hope that others are inspired by my example, because it goes to show that sight loss shouldn’t stop you taking on a new challenge!”

In 2009 Lt Col. Mike McErlain, with his wife Jo, set up the D-Day 44 Challenge, which involves a 44 mile run or 22 mile walk through fields, villages and beaches along the Normandy coastline. Sadly, Mike died while doing the run on 6 June 2013, but with the blessing of Mike’s widow, Jo, the event returns in 2018 to raise money for Blind Veterans UK, Combat Stress and BLESMA.

To support Carl as he takes part in the D-Day 44 Challenge, head to justgiving.com/campaigns/charity/blindveterans/d-day