Margaret Runcie, a 96-year-old World War II veteran, was the guest of honour at a tree-planting event marking the Queen’s Platinum Jubilee held at Edinburgh’s Whitefoord House today. Margaret, who was born in Hertfordshire and now resides in Haddington, East Lothian, served as a Petty Officer in the Women’s Royal Naval Service (WRNS) in the Second World War. 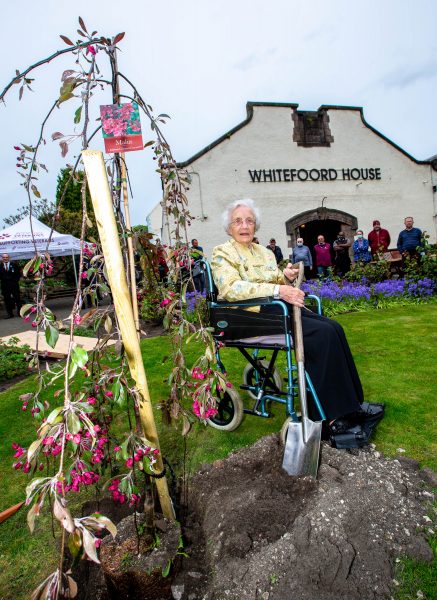 In June 1944 at the age of 18, she was posted to Royal Naval Air Station Crail in Fife (HMS Jackdaw) as a radio mechanic for 785 Squadron where her duties included changing batteries from aircraft returning from missions, usually at night.  During here service, which continued until the end of 1946, Margaret lived in Crail House, a mile from the base.

Despite her South East of England roots, Margaret spent most of her military leave travelling throughout Scotland where she eventually settled following her marriage to Ken in 1956. Her former base in Crail is now one of the biggest preserved Naval Air Stations in the UK, and a room in Crail Museum is dedicated to the life and people who served on HMS Jackdaw.

Today Margaret visited Edinburgh’s Whitefoord House, a supported housing facility run the charity Scottish Veterans Residences (SVR), where she joined residents to plant a tree in celebration of this year’s Platinum Jubilee. The tree was sponsored by the Association of Wrens and Women of the Naval Services Edinburgh Branch. The Royal Naval Association Edinburgh branch also planted a tree as part of the Queen’s Green Canopy initiative.

SVR has been operating for more than 100 years providing accommodation and services for UK military veterans who are experiencing homelessness. The charity’s housing support services in Edinburgh, Dundee and Glasgow provide accommodation for up to 160 veterans at one time.

“I’m delighted to be here planting this tree on behalf of The Association of Wrens and Women of the Naval Services to mark the Platinum Jubilee. The Queen and her father, King George, were an immense inspiration to all servicemen and women throughout the war so it’s an honour to be here celebrating the 70th year of her reign.”

“As an organisation which is fully committed to supporting veterans, we are absolutely thrilled to have Margaret and so many representatives from the Naval Services Association at today’s tree planting. As we mark the Queen’s historic milestone, it’s important we also acknowledge the commitment and sacrifice of our veterans who have kept the UK secure during the past 70 years.”