WWII veteran Frederick “Fred” Glover 94, from Brighton, died on 31 of October 2020 having spent his last few days in hospital where the medical team were trying to build his strength up after he had fallen a few times at home. Unfortunately, while in hospital he picked up a chest infection which was diagnosed as Covid-19. Fred was a real hero and the only known British Infantry man to have fought with the French Resistance during WWII. In May 2021 the French were to honour Fred by naming a street after him in Merville Franceville in Normandy. 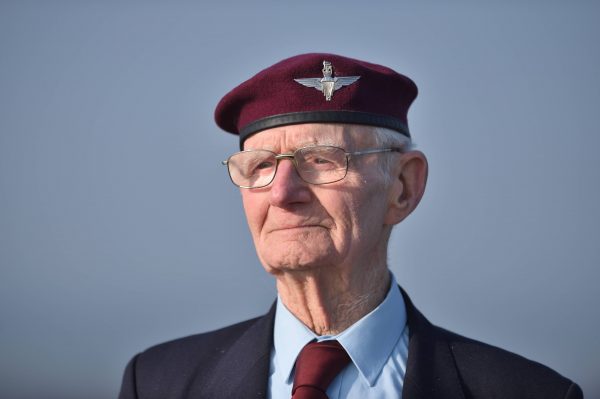 “As a family, not only were we proud of his service to his country, but we were also proud to have him as a dad, grandad and great grandad. He made such an impact on all our lives. We will miss you so much”

“I was very sad to hear of the death of Fred Glover. I well remember meeting Fred at the international ceremony at Merville Battery on 6 June 2018 and chatting to him there. It was such an honour to be standing at that site alongside Fred and his other comrades from 9 Para who had been there on D-Day and taken part in the assault – and to witness their determination to make sure their mates who did not survive were not forgotten. I remember Fred’s ready smile and how he helped gather us all for a photo, a photo which I treasure. And I have subsequently read the more detailed account of Fred’s war, including his escape from hospital in Paris with the help of the Resistance just in time to witness the Liberation of the city. I am honoured to have met Fred Glover – my sympathy to his family and his friends.”

Pierre-André DURAND, Préfet of the region of Normandy, said

“It is with great sadness that I heard about the passing of Frederick Glover, veteran of the 9th Para Bn, 6th Airborne Division. This valiant paratrooper is one of those unsung heroes of the D-Day landings in Normandy. He was dedicated to the memory of his brothers in arms and always grateful for the help the French resistance had provided him and would endlessly share with the young his commitment towards freedom. In the name of the French-British friendship and with gratitude for the services rendered by Frederick Glover, I extend my deepest sympathy to his family and all his loved ones.”

“Everyone in the Taxi Charity Family loved spending time with Fred, he was a real character who always filled the room with warmth and laughter and he will be sorely missed.”

To find out more about the Taxi Charity visit www.taxicharity.org

Fred Glover was called up during WWII and after his training volunteered for the Parachute Regiment and was posted to 9 Battalion.

On D Day, 9 Battalion were charged to assault and silence the guns of a battery situated near the village of Merville, situated to the east of the beaches.

When interviewed some years ago Fred said, “We are informed that the guns must be silenced by H Hour minus 30 minutes; that is to say 30 minutes before the first of the sea borne troops hit Sword Beach. The briefing closed with the statement that failure is not an option and with these words imprinted in our minds, we waited for the command to go.”

Armed with automatic weapons, grenades and the Fairbairn-Sykes fighting knife Fred flew from RAF Brize Norton into Normandy in Horsa glider number 27 one of the 150 men who formed A Company. Once across the Channel ack ack fire from the German 20mm gun hit the gliders fuselage and several men were hit. Fred received wounds to both legs.

Once on the ground the men were immediately engaged in a fire fight with enemy troops moving from the village of Gonneville to reinforce the defenders of the battery. “With the withdrawal of these German troops we are able to make our way the short distance to the battery; I needed assistance as I felt blood inside my boots and the pain is beginning to bother me.  My wounds were dressed, and I attempted to follow my comrades but after a short distance I can go no further.”

His fellow men left Fred with two German Prisoners. One of the Prisoners, a German officer was in acute pain and Fred, in an act that would ultimately save his life later, gave him his morphine.

When German reinforcements arrived, Fred was captured and was destined to be shot until the German Officer that Fred had helped with morphine asked for clemency and instead Fred was taken as a prisoner of war to Hopital de la Pitié-Salpêtrière in Paris.

The hospital treated Fred’s open wounds and he began working with the French Resistance who were operating out of the hospital. When news reached them that the allies were near, Fred’s escape was planned. On the day of his escape Fred worked as an Orderly, the Resistance staged an incident outside the main gate and Fred made his escape carrying a full bed pan past the guards.

When the Americans arrived, Fred was flown back to the UK and after making a full recovery went on to fight in the Ardennes.