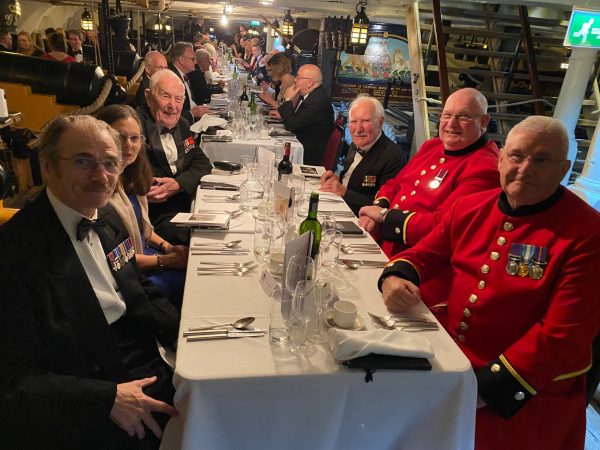 The Taxi Charity accompanied by WWII Royal Navy veterans, Ernie Davies, 96, and Harry Rice, 95, were delighted to be invited to the Defence Medical Rehabilitation Centre (DMRC) Benevolent Fund Dinner on 9 October on board HMS Victory in Portsmouth.

The Taxi Charity picked up the two veterans  from their homes in Hornchurch and  Guildford and drove them to a Portsmouth hotel where they enjoyed a tot of rum before heading to the historic dockyard, where special security arrangements had been made for the London Black Cab to pull up alongside Nelson’s flagship, HMS Victory.

Accompanying the veterans at the event hosted by the DMRC were Taxi Charity, Vice President Frances Wyhowska,  and London Cabbie and volunteer Mickey Calvey.

“The Taxi Charity for Military Veterans is proud of its links with the DMRC (Defence Medical Rehabilitation Centre, Stanford Hall) and was honoured to be included as guests at the Benevolent Fund Dinner on board Admiral Lord Nelson’s flagship, HMS Victory. It was an added bonus that we were able to take two WWII Royal Naval veterans who enjoyed an outstanding evening.”

“Harry and I had such a fabulous weekend. The Taxi Charity picked us up from home, took us to the dinner, paid for our overnight stay in a hotel and then after a hearty breakfast took us home again. The DMRC dinner was a fantastic occasion and we felt very privileged to have been invited to attend this evening on the Royal Navy’s most famous warship.”