The Taxi Charity for Military Veterans was saddened to hear of the death of WWII veteran Fred Faulkner, on Sunday 10 January 2021 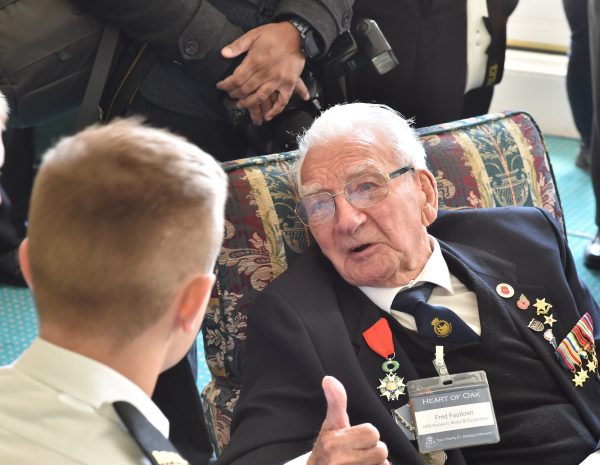 Fred was born in Walton-on-the-Hill in 1921, the middle son of five boys. In 1940 he joined the war effort and enrolled in the Royal Navy travelling the world from Australia to America.

In 1947, Fred married Ella, they had two children Alan and Maureen, six grandchildren and twelve great grandchildren. He was a keen golfer and had a lifetime association with the Walton Heath Artisans Golf Club. He held every position from barman to Captain and worked in the locker room until he was 92.

Fred was a regular on Taxi Charity trips and in 2019 joined the Taxi Charity on a trip to Portsmouth where during the three-day trip, he spent time talking to young naval ratings before an emotional visit to the D Day command centre in Southwick House.

“In his later years Dad enjoyed the camaraderie of the wonderful Taxi Charity for Military Veterans. They organise trips abroad and at home for veterans of all services. Dad has been with them to France. Holland, Belgium, Worthing, and Portsmouth several times. The veterans are treated like the VIP’s that they are. They shed twenty years in age when they get together. I have been on a few trips as Dad’s carer and it is truly humbling listening to their tales of past exploits.”

“Fred was a wonderful man whose company was always a joy. The young navy ratings that he took time to talk to during a Taxi Charity visit to Portsmouth in 2019 were totally enthralled by his stories. He will be greatly missed by everyone in the Taxi Charity family.”