The Taxi Charity was sad to hear that WWII Veteran Geoff Pulzer, a much-loved member of the charity family, had died on 2 March 2021 in Barnet Hospital 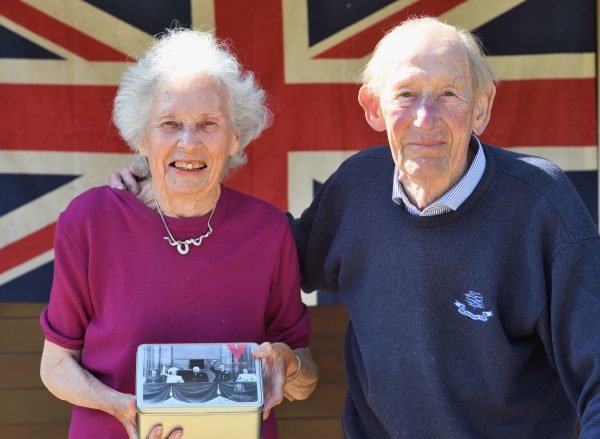 WWII veteran Geoff Pulzer, 97, from Brookmans Park, Hertfordshire, served with the 23rd Hussars, attached to Brigade HQ of 29th Armoured Brigade, part of 11th Armoured Division and on 6 June 1944, spent his 21st birthday preparing to land on Juno Beach which they did on D +7. Seventy-five years later he was back in Normandy with the Taxi Charity to mark    D Day and celebrated his birthday with his wife Julienne, and a group of WWII veterans and volunteer London licensed cabbies.

After the trip to Normandy in 2019 Geoff sent the charity a lovely thank you email from which this extract is taken.

“I would like to take this opportunity to tell you how much Julienne and I enjoyed the very nostalgic trip to Normandy. I cannot thank the Taxi Charity enough for the fun and kindness you all expressed, the efficiency of the operation and the enthusiasm of all concerned. The hotel was comfortable, good food and the itinerary was excellent. Lastly to let you to know that I was humbled by the whole experience, tear jerking at times and I cannot find suitable adjectives to further express our feelings. Bonhomie comes to mind!”

“Geoff was a fabulous advocate for the charity and would always help with requests from the media to talk about the second world war. In May 2020 he spoke with Dermot Murnaghan about the 75th anniversary of VE Day for the Sky News Podcast and told Dermot that after the liberation of Belsen he was headed towards Lubec when the surrender was announced. He used to say that he couldn’t remember much about VE Day as he was so inebriated. Someone had looted a liqueur store and given him a bottle of brandy and he had drunk it all.

“Geoff was a much-loved member of the Taxi Charity family and we send our deepest condolences to Geoff’s wife Julienne and his two sons Michael and Philip. Rest in peace soldier and thank you for your service.”

“Our wonderful Father had a fabulous life which was enriched by his family and his many friends. He played rugby regularly when he worked at Shell BP as part of their team and he loved playing golf. He enjoyed life in the outdoors and spent a lot of time cultivating a beautiful garden and walking in the countryside. In his later years Dad was an avid Bridge player. The Taxi Charity was very important to our Father and we have asked the charity to be closely involved in the funeral when we say our final goodbye.”