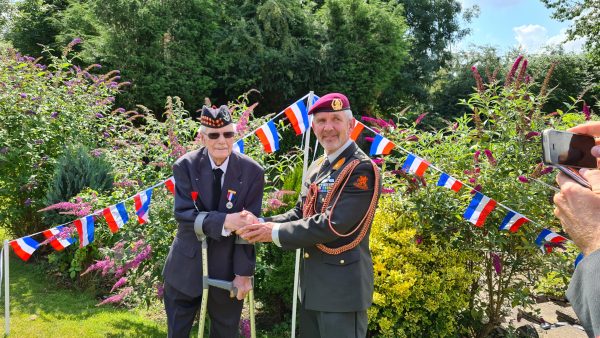 Walter Knight, 96, from Coventry, served in The Netherlands with the 2nd Battalion Seaforth Highlanders 51st (Highland) Division during WWII. His grandson, Colin Stew, contacted the Taxi Charity to find out if his grandfather was entitled to the Dutch Liberation and to ask for help in getting a medal presented to his beloved grandfather.

Dick Goodwin, Vice President of the Taxi Charity, sent details of Walter’s war service to the Dutch Embassy and was delighted to inform Colin that his grandfather was indeed entitled to the Thank You Liberators Medal and that that charity would liaise with the Embassy to arrange a formal presentation by the Military and Air Attaché at Walter’s home in Coventry.

“The Taxi Charity was delighted to assist Colin and we are so pleased that Walter has been recognised by the people of The Netherlands for the part he played in their Liberation. Each May we take a group of WWII veterans back to The Netherlands to mark Dutch liberation and it so humbling to see the people come out in their thousands to thank these heroes. Although the pandemic has stopped these visits for the last two years, we hope to be able to visit once again next year and reunite the veterans with the families they liberated.”

“ I am over the moon that the Taxi Charity was able to help me to get this medal for my grandfather. It is just the good news he needed after year we have all had during the pandemic.”

“After 77 years, the people of The Netherlands still daily celebrate their freedom, given to us by brave men and women like Mr. Walter Knight. We can’t thank them enough for the incredible sacrifices they made by fighting to liberate a country they hardly knew anything about. It did not only provide us with our freedom, but also resulted in the best British – Dutch relationship imaginable, which undoubtedly will be forwarded to the next generations.”

When asked for memories of his time in the Netherlands ,Walter said, “When we first got to Holland two Dutch girls walked  past and invited both me and another soldier back to their house for some food. The family did not have much but still looked after us both  well. They were very generous and very nice folk.”

Walter was shot in the war, and he explained how it happened,

“I was in a trench in s-Hertogenbosch, it was dark and out of nowhere some German soldiers came within a few yards of us. The sergeant planned to sneak round the back and throw a grenade, which was the signal for me to start shooting. I heard ‘grenade’ so began shooting but unfortunately, I got caught by a German bullet which went through my hand into the rifle butt. I often wonder if I had thrown a grenade at the same time as my sergeant, we might have avoided the gunfire.”