On 5 December 2019 WWII veteran Tom Schaffer was presented with the Dutch Liberation Medal.

The Dutch Liberation Medal was presented to Mr Schaffer at the annual Taxi Charity for Military Veterans Christmas lunch in South East London, by Lieutenant Colonel Rob Arts, Military and Air Attaché and Deputy Defence Attaché, from the Embassy of the Kingdom of the Netherlands. 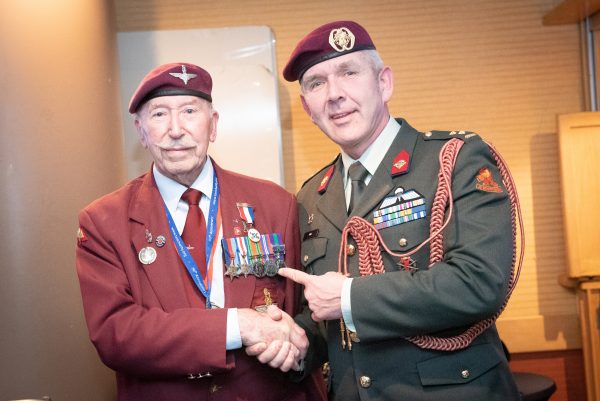 “It is such a privilege representing my country at this Taxi Charity event and presenting our liberation medal to Mr Tom Schaffer. I am really humbled, also by the enormous number of letters sent by Dutch children, illustrating the Dutch gratitude and respect for our World War II liberators will continue big time.”

“It is a real honour to have been presented with the Dutch Liberation medal by the Dutch Military Attaché, surrounded by so many friends. Next May, I will be travelling to the Netherlands with the Taxi charity to celebrate the 75th anniversary of the Dutch Liberation and I will wear this medal with immense pride.”

Tom was also presented with some of the four hundred Christmas cards that had been sent to the Taxi Charity to distribute to WWII veterans from Dutch school children.

About the Dutch Liberation Medal