You are here: Home / News / News / WWII Veteran Revisits the Normandy Barn where his life was Saved

WWII Veteran Revisits the Normandy Barn where his life was Saved

Last week D Day Veteran Bill Gladden returned to the barn where his life was saved when he was injured in 1944. 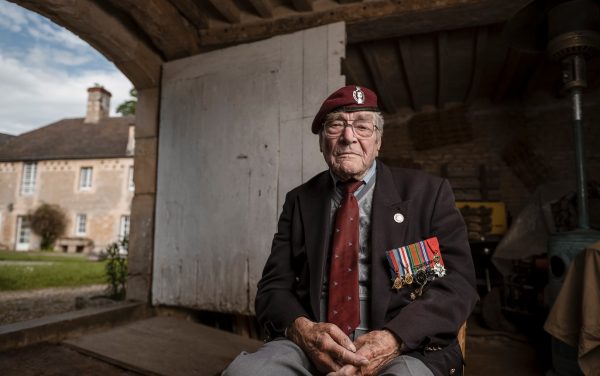 Bill Gladden, 98 from Haverhill in Suffolk, served with the 6th Airborne, Recce Regiment. On 6 June, aged 20, Bill flew into Normandy on a glider carrying a tank and six motorbikes, as part of Operation Overlord. On the 18 June he was injured and spent the next three years in hospital recovering.

Bill retuned to Normandy this year with The Taxi Charity for Military Veterans where a very special return visit to the barn where his life was saved was facilitated by Author Neil Barber and Photographer Robin Savage.

Bill was holed up in an orchard with members of his regiment just outside Ranville in June 1944. Two days before he was injured, Bill had caried two of his fellow soldiers into a barn. Sadly, they did not recover from their wounds, and they are buried in the Commonwealth War Graves Cemetery at Ranville.   On  18 June, two days after carrying his badly wounded friends to the barn, Bill was injured in the leg  by machine gun fire from a Tiger Tank and he was carried into the same barn. Once inside he  was given morphine and the necessary medical attention to keep him alive while he awaited evacuation back to the UK. Bill was luckier than his friends as he made it back to Portsmouth on 21 June. His injuries to his leg were severe and he spent three years in hospital recovering and learning to walk again.

“I have been travelling back to Normandy with the Taxi Charity for Military Veterans for many years and this year I was very touched that Neil and Robin had spent time finding the very barn where my life had been saved and where I had last seen my injured friends who didn’t survive. The current owners of the barn were so welcoming, and I must admit the visit was very nostalgic and brought so many memories flooding back. I think part of my tibia is probably still in that orchard  – perhaps one day someone will stumble across it!”

“The afternoon we spent with Bill taking him back to the barn near Ranville was one of the most special moments I’ve ever had in Normandy, and I am so pleased we were able to do it for him. We thought we might just be able to show him the barn from the outside, but the current owners were so welcoming and invited Bill into the barn and showed us around their home which had been used as a ‘Main Dressing Station’ during the war”

To find out more about the support the Taxi Charity offers veterans or to donate please visit www.taxicharity.org