On the 77th anniversary of D Day, volunteer London Cab drivers took a large group of WWII veterans to the National Memorial Arboretum to participate in the official opening of the British Normandy Memorial in Ver-sur-Mer. 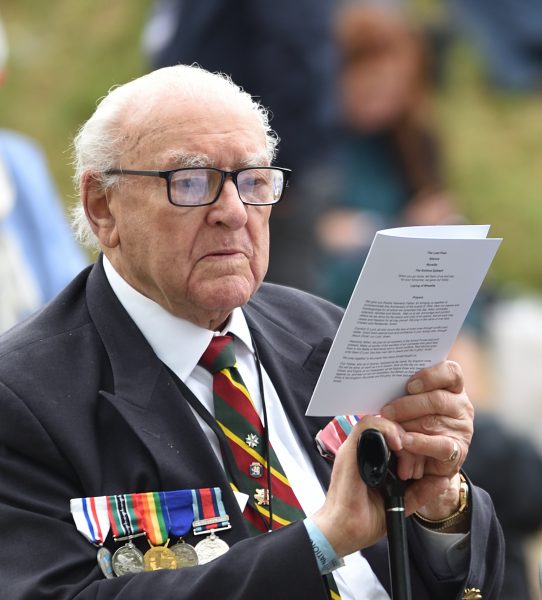 The Taxi Charity for Military Veterans originally planned to take a group of WWII veterans to Normandy to participate in the opening of the new British Memorial, situated in Ver-sur-Mer overlooking Gold Beach, one of the five beaches used by the allies on D Day 1944. Unfortunately, pandemic restrictions meant that instead of the charity taking the veterans to the warm sun of Normandy to remember those  who did not come home, the veterans sat in the rain at the National Memorial Arboretum in Staffordshire watching a live link.

Veterans Gilbert Clarke and Ken Hay who both spoke during the moving service, John Pinkerton, and Tom Schaffer, who laid a wreath of poppies and Doug Baldwin who received the Legion d’Honneur were amongst the group of WWII heroes brought to the event by Taxi Charity volunteer cabbies.

“It was very moving to see the faces of the veterans we support as the new British Normandy  Memorial overlooking one of the D Day beaches in Ver-sur-Mer was officially opened. Under normal circumstances the Taxi Charity take veterans back to Normandy each year to mark D Day. Sadly, the pandemic has meant that we have not been able to travel to France for the 76th or 77th anniversary but we are determined that as soon as we are able, we will take a group of veterans across the channel to pay their respects at the new Memorial.”

WWII Veteran Roy Maxwell, No4 Commando, who landed at Sword Beach on D Day was taken to the event by Taxi Charity volunteer and ex Para Chris Willmott.

“It would have been so wonderful to have been in Normandy with the Taxi Charity today for the opening of the new British Memorial but sadly that was not to be. It  is so beautifully sited on a hillside above Gold Beach  proudly facing towards England and I hope that we will be able to go and pay our respects soon.”

During the service WWII Veteran Doug Baldwin, 6th Battalion King’s Own Scottish Borderers was presented with the Legion d’Honneur, the highest French order of merit, for the part he played in WWII. He went over to Normandy just after D Day, was captured at Estre and taken POW until the war ended.