On 5 May twenty-five veterans were applauded as they led the Dutch Liberation Parade through the streets of Wageningen. 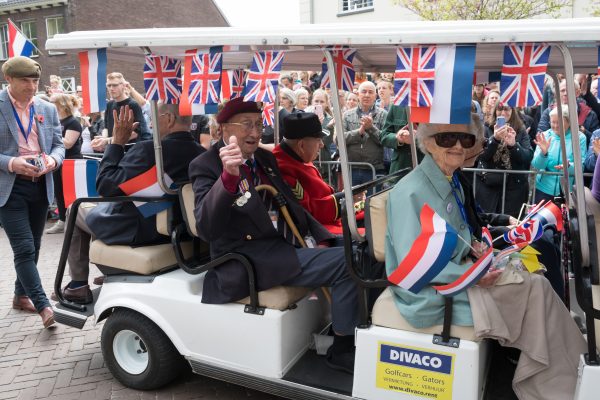 The veterans were taken to The Netherlands by the Taxi Charity for Military Veterans in a fleet of 30 black cabs. Their first experience of the love the Dutch have for them was as the cabs leave the Ferry at The Hook of Holland and a police motorbike escort closes 75 miles of motorway and roads to take the veterans in convoy to Wageningen.

The Germans signed the capitulation in 1945 in Wageningen which gave the people of Netherlands their freedom. The Dutch experienced many hardships during the German occupation so the Liberation Parade on 5 May is a huge celebration that thousands attend to offer their love, admiration, and thanks to their liberators. 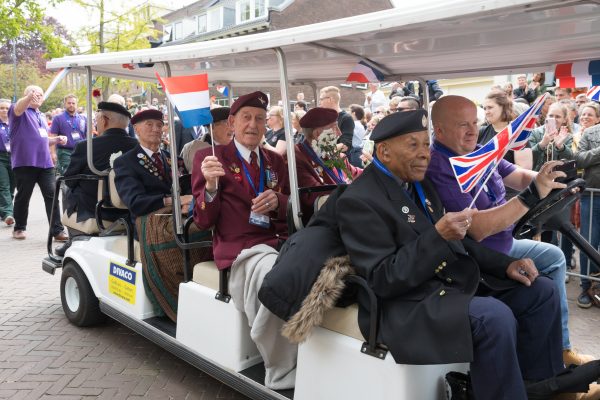 On 5 May, the veterans led the televised Dutch Liberation Parade while veterans 103 year old Ray Whitwell, and 102 year old Major Ted Hunt MVO, sat in Wageningen Square, outside the hotel where the capitulation was signed,  with the invited dignitaries including the husband of the Dutch Princess Royal, Prof. Dr. Mr. Pieter van Vollenhoven.  The Dutch Defence Minister Kajsa Ollongren spoke to the crowd of thousands and  thanked Arnhem veterans Major Ted Hunt and Raymond Whitwell in her speech before the parade started.

“The outpouring of love for the veterans is incredible throughout our stay, but during the parade the noise of them thanking their liberators is deafening. Our veterans sit in three golf buggies and three black taxis at the head of  the parade and the streets are lined by thousands of men women and children who cheer, applaud, and shower their liberators  with flowers as we progress through the town. It is a truly moving and unforgettable experience and there are tears from both those in the parade and those who have come to say thank you and to celebrate their freedom.”

Arnhem Veteran, Geoff Roberts who served with the Kings Own Scottish Borderers,  said,

“I think of The Netherlands as my second home,  and I love to visit as often I can. Participating in the parade is important so that we can thank the Dutch for welcoming us every year. I was captured in the Arnhem area in 1944 and was taken prisoner and was held POW for the rest of the war, but I will never forget the kindness of the people. They had so little, and so did we, but we shared whatever we had with each other.”

Frans Ammerlaan from The Market Garden Foundation, who coordinates Taxi Charity visits to The Netherlands, said,

“I have been working with the Taxi Charity for many years to facilitate their visits. I consider myself very fortunate to call the volunteer Taxi drivers, the carers, charity team and the veterans my friends. As the veterans are in either their late nineties or hundreds the planning is complex, but it is so rewarding to see the joy when the veterans and the  Dutch people come together to remember.”

To find out more about the support the Taxi Charity offers veterans and the trips they organise across the continent visit www.taxicharity.org