On Saturday 5 June, a group of WWII veterans were invited to enjoy an  afternoon on the Normandy Flyer steam train on The Battlefield Line in Leicestershire 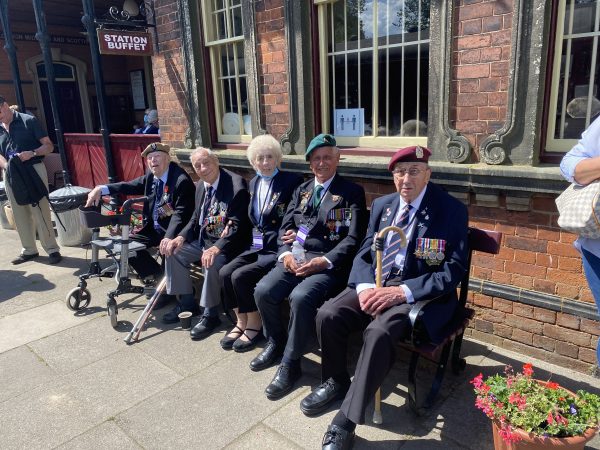 The WWII veterans were driven to the Battlefield Line in London Black cabs driven by Taxi Charity volunteers. The veterans enjoyed a ride on a steam train which had been renamed Normandy Flyer for this special visit. The Normandy Flyer left Shackerstone station at 12.30pm on 5 June, in glorious  sunshine, and travelled via Market Bosworth before arriving at Shenton. The London volunteer cabbies, the veterans and their carers all enjoyed a fabulous picnic on the return journey to Shackerstone. The visit was particularly poignant as the line had been used to transport fuel for the D Day invasion in 1944.

“The Taxi Charity had been invited to take WWII veterans to the National Memorial Arboretum on 6 June to watch the opening of the British Normandy Memorial and when we heard about The Battlefield Line, we decided to make a weekend of it. Our volunteer cabbies brought veterans from all over the Southeast and we were joined by a veteran from Kenilworth and a group of veterans from Preston. The volunteers who run the Battlefield Line really looked after us well and ensured everything was spotlessly clean and that we were able to adhere to social distance guidelines.  I am sure the volunteers who run the Battlefield Line enjoyed the veterans’ visit as much our veterans did.”

“What a fabulous day. The sound of the steam train brought back so many lovely memories for us all. We are so lucky to be part of the Taxi Charity family and we  have an amazing group of volunteer London cabbies who always look after us veterans so well. It’s been a difficult fifteen months with all the pandemic restrictions, so to be out enjoying ourselves with our fellow veterans was just what we all needed.”

On the following day, (6 June) the 77th anniversary of D Day, The Taxi Charity volunteer cab drivers took the veterans to the National Memorial Arboretum to watch the opening of the British Normandy Memorial