9-year-old Jack Chadwick will take on pogo-stick challenge in memory Marisa Tomkins, a veteran and dedicated SSAFA volunteer, after she passed away at age 63. 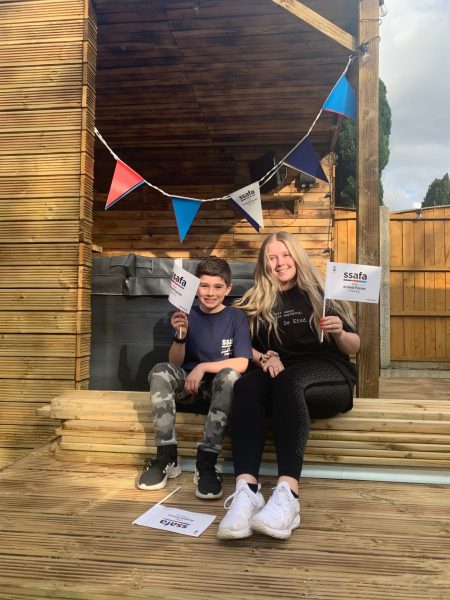 On February 26 2021, Marisa Tomkins sadly passed away suddenly and peacefully. Young family friend Jack was inspired to fundraise in her memory, and continue to support her favourite charity, by attempting to complete 200 pogo-stick jumps everyday throughout the month of March. This will amount to a total of 6,200 jumps to raise money for SSAFA, the Armed Forces charity – a cause close to Marisa’s heart.

Marisa served in the British Territorial Army (TA), Army Reserves from 1985, including military operations in Baghdad, Iraq. She received the Iraq medal in 2006 and achieved the highest rank in the TA as Captain. She also obtained her 5 year and 10-year TA Service Medal, and her Jubilee Medal. Marisa was very well respected and had only recently retired from the Territorial Army at the age of 60.

In 1992 Marisa joined the Police Force for 18 years alongside her continued TA commitments; she also served in Bosnia as a Police Officer. Once retired, she continued to work for the Benevolent Fund, which is a support network for active and retired Police Officers and volunteered to support the Armed Forces community in the Bury area with the charity, SSAFA.

“I feel really really good and happy that I can help people.”

My little brother Jack Chadwick tries to raise money for charity every year. So, this year Jack decided to do something a little out of the norm and complete 200 pogo-stick jumps each day in March to try and raise £200. He had yet to choose a charity when our lovely family friend Marisa Tomkins sadly passed away. She was only 63 years old and fit as a fiddle but unfortunately, she suddenly – but peacefully – passed away on February 26 2021. Marisa was a much loved and dear friend to everyone.

She honestly was the strongest, most amazing woman I had the pleasure of knowing and will be missed by everyone. If Marisa had to live by one line, it would be to “live life to the full” and she certainly did that!”

Jack has already smashed his target of raising £200 and has raised an amazing £2,705 so far. Please help Jack raise even more for SSAFA, the Armed Forces charity in memory of Marisa Tomkins. All donations will go to SSAFA in Marisa’s memory.

By @Cobseo 40 minutes ago