The Chairman of Royal Star & Garter has taken part in a 26-mile indoor row to kick-start a long, gruelling challenge.

Major General Tim Tyler is rowing the equivalent distance from his home in Ovington, Hampshire, to the charity’s Surbiton Home, before ‘rowing’ between the Surbiton, High Wycombe and Solihull Homes. In total, he will cover 156 miles. 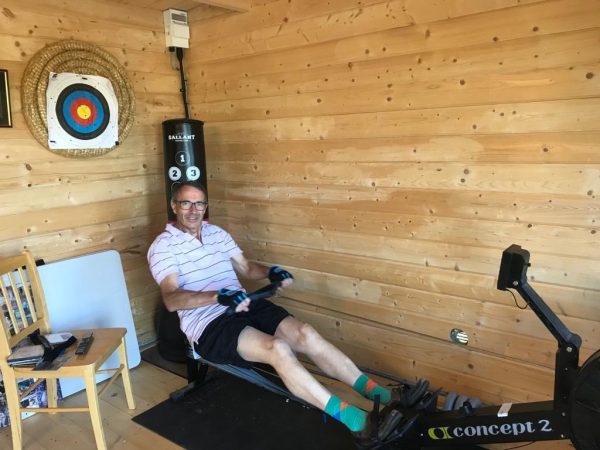 He used the 2.6 Challenge on Sunday 26 April to kick-start his initiative, by rowing the first 26 miles.

Major General Tyler is looking to build on the £4,000 he has already raised for Royal Star & Garter, which provides loving compassionate care to veterans and their partners living with disability or dementia.

The 2.6 Challenge is a nationwide initiative aimed to help charities which are feeling the financial effects of the coronavirus pandemic from the result of cancelled mass-participation fundraising events such as the London Marathon. Royal Star & Garter has joined with thousands of other charities to take part in the challenge.

Also raising money through the 2.6 Challenge is the charity’s Marketing & Communications Officer Nadia Rehman, who is walking 26 miles over a number of days with her husband Hamaad and four-month-old daughter Maryam. 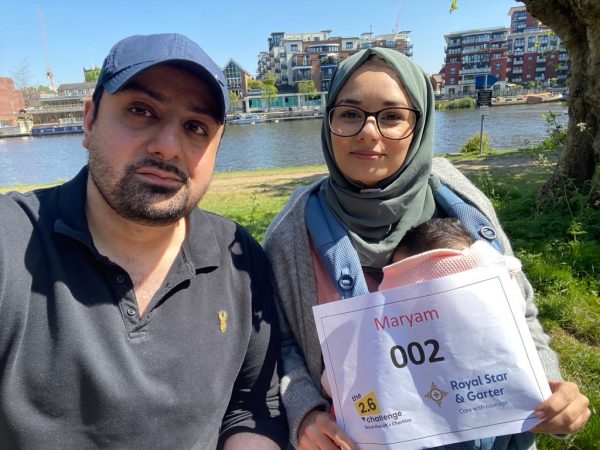 Major General Tyler has been Chairman of Royal Star & Garter since 2016, having enjoyed a long and illustrious career in the military. He was commissioned into the Royal Electrical and Mechanical Engineers in 1972, becoming a Colonel Commandant in 2005. He was appointed Director-General Logistics (Land) and then Director-General Land Equipment as well as Quartermaster-General to the Forces, before retiring in 2008.

“I have been using the rower regularly since February and gradually increasing my speed and distance. In the last week I have been testing myself at increasing distances to see how fast I should take it. I’m fairly fit, but I had not rowed the whole 26 miles so the last leg was tough.”

He praised the support he’s receiving from his wife, children and grandchildren, who are encouraging him and helped with fundraising, and daughter Felicity who joined him via video from Switzerland on her rower for the last leg of his 26-mile row.

“Like all organisations, the coronavirus outbreak has pushed our operations in a way that I could never have imagined. Our amazing staff are caring with courage on a daily basis to support vulnerable residents. I want to lead by example and do my bit to ensure Royal Star & Garter can continue offering the very best care through this pandemic and beyond.”

Members of the public were due to raise money for Royal Star & Garter at The London Marathon and London Landmarks Half Marathon, before both were postponed. Sergeant Greg Smith and Pete Seabrook, who together make up The Charity Adventurers, also had to pause their fundraising hike between Royal Star & Garter’s three Homes in Solihull, Surbiton and High Wycombe because of the pandemic.

During the coronavirus crisis, the charity has invested in technology to allow residents to keep in touch with loved ones via FaceTime and WhatsApp while visits to the Homes have been paused. Significant funds have been spent procuring Personal Protective Equipment.

The 2.6 Challenge launched on Sunday 26 April, on what would have been the 40th London Marathon. It aims to inspire people to carry out their own fundraising activities around the numbers 2.6 or 26, while observing isolation and social distancing guidelines.

Nadia, who lives in Kingston, wants to raise £2,000. She was motivated by the work of the charity, and her faith in Islam:

“We’re really excited to be raising funds for Royal Star & Garter who provide such amazing care to the veterans who have already sacrificed so much for our country. It was really important to us as a family and as part of our faith that we do our small part towards helping those that are vulnerable and in need of support. We decided that there was no better time for little Maryam’s first fundraiser.”

You can sponsor Major General Tyler by visiting his fundraising page here: http://www.justgiving.com/tim-s-26-mile-rowing-challenge

Anyone interested in raising money for Royal Star & Garter through the 2.6 Challenge can go to https://starandgarter.org/how-you-can-help/events/twopointsixchallenge/

About Royal Star & Garter
Our charity provides loving, compassionate care to veterans and their partners living with disability or dementia.