You are here: Home / News / News / A new CESSAC café – in the Garrison Community Hub, Aldershot

A new CESSAC café – in the Garrison Community Hub, Aldershot

This is not CESSAC’s first facility in Aldershot – the original of which opened in 1857, and the building that it operated here from 1887 to 1971 is still nearby. 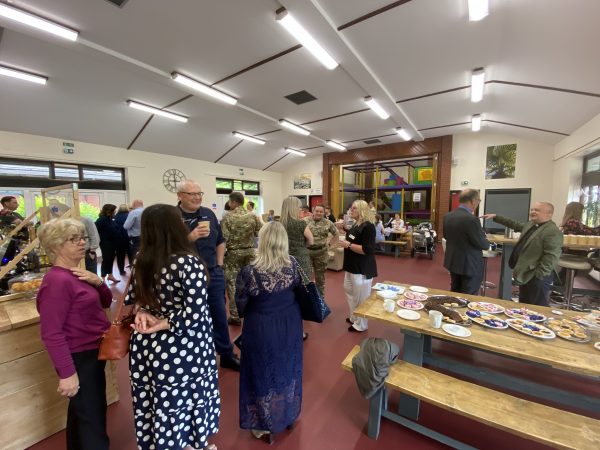 However, although this café is new to us, it had been operated for its first couple of years by a fellow Armed Forces charity, Sandes.  Indeed, it is because both are members of a co-ordinating organisation, called the Council of Voluntary Welfare Work (CVWW), that we learned in February that Sandes were having to withdraw on 19 April.  Thanks to this advanced warning, CVWW and the Garrison agreed CESSAC should take over as soon as possible thereafter and arrangements made between all parties to minimise the gap.  CESSAC started an initial service on 12 May, increasing the scope as quickly as possible thereafter, and a formal ceremony was held on 8 June.

Aldershot is described as ‘the Home of the British Army’ and houses the Army’s Regional Command and about 26 major and minor military units.  The total service population is over 10,000, consisting of around 3,900 resident soldiers, some 1,000 transient military personnel on courses or sport, 770 MoD Civil Servants and some 5,000 service dependents.  The Community Hub is in one of the two largest Family Quarter patches and provides a ‘one stop shop’ to meet the welfare needs of the military community.  It also provides a venue for connecting the military and civilian communities, through shared activities and use of the great facilities, which includes the Café, an indoor play area and the fantastic Wellington Playpark.  CESSAC is proud to be able to play a part in supporting this endeavour.