You are here: Home / News / News / A Relationship Tested by Trauma: Sharon, Paul and Holly Too

A Relationship Tested by Trauma: Sharon, Paul and Holly Too

Today, Sharon and Paul have what many would call the perfect life. Paul has a good, secure job he enjoys, Sharon runs her wedding cake business from a studio in their beautiful garden – and beloved dog Holly keeps them on their toes. But it wasn’t always so. 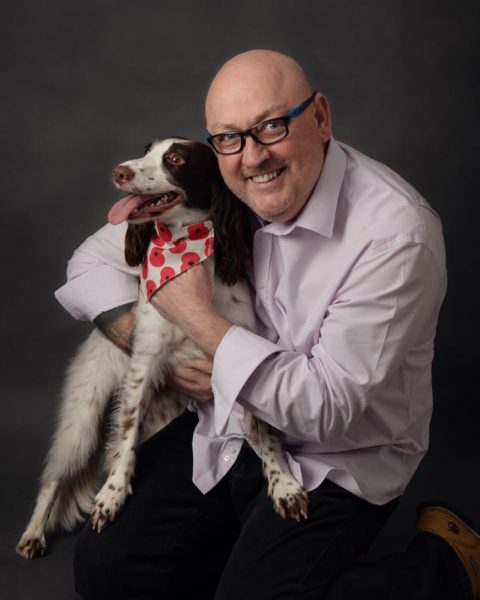 As soon as Paul moved in, Sharon knew something was wrong. Up until then he had been her “big, bubbly Irishman” – but as his angry outbursts grew more frequent and more severe, it became clear his 22 years of military service had taken a toll. 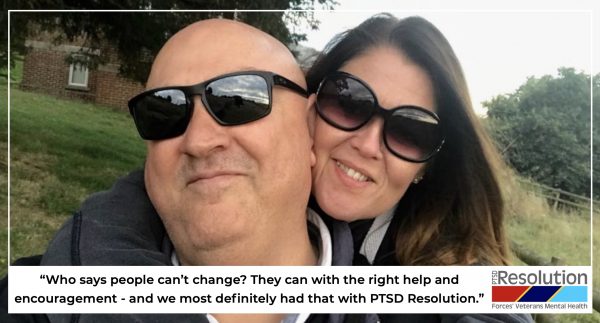 Paul had left the army in 2007, after tours to Bosnia, Iraq and Northern Ireland. He started a plumbing business after retiring but hit financial problems when a serious bout of pneumonia put him out of action.

The growing financial pressure intensified his PTSD symptoms, and while he was hugely affectionate and caring,

“his moods were explosive and loud, never physical, but something I’d never experienced… the spark to fire was never far away”

“Then there were the nightmares,”

Sharon recalls. Suffering from flashbacks, Paul would wake up sweating and trembling most nights. Often he would withdraw completely. “He would go off for days sometimes or shut himself in the bedroom,” Sharon says. Paul was finding it impossible to cope with social arrangements and would cancel plans at the last minute – preferring to watch war films “endlessly, which in turn resulted in a restless night. And the cycle would start again.”

Functioning on a fraction of sleep, the couple’s stress was compounded by Paul’s hearing loss.

“The TV volume was set at 94, it was deafening,” says Sharon, “and If I said anything he would remove himself and stay in the bedroom, not speaking for days.”

Isolated from family who had turned away “through lack of understanding and ignorance, perhaps” – Sharon was exhausted and “horribly lonely.” She was no stranger to conflict at home – she had had a difficult home life as a teenager and had grasped her independence at the first opportunity. It was recognising this familiar anxiety, the “shaky, sickening feeling from my teenage days” that convinced her something had to change.

After one “horrific night that I try hard not to remember,” Sharon hit rock bottom. She realised she did not know how to help Paul and was ready to walk away, “I was desperate to get help for myself,” she says.

While searching for answers online, she came across PTSD Resolution and read about the free therapy on offer for Veterans, Reservists and their families. She rang the number, left a message and continued googling. Twenty minutes later she had a call back and a therapy appointment booked.

“The relief was immeasurable,” she says.

After her first appointment Sharon felt lighter and more hopeful. Her therapist showed her some coping techniques to deal with her own anxiety – and explained how PTSD affects the brain. She was assured that Paul could also be helped, but it took him a little longer to dive in.

Paul had been on a winding, patchy treatment journey for over a year, which had left him ambivalent about the prospect of recovery. After lengthy applications he had finally received an appointment with a Veterans’ mental health organisation in 2017. He was diagnosed with PTSD, depression and anxiety, prescribed Sertraline – and put on a waiting list for a six week residential therapy course.

“It was our only option at that time, but financially the business was already suffering and another six weeks without income would have ruined us.” Then – Sharon was told she would be made redundant in the next few months. “It was a desperate time,” she says.

As the stress built up Paul’s medications were increased, both painkillers and antidepressants, and he became more reluctant to ask for help, saying “no one can do anything.” He would make GP appointments and then cancel, or else lose his temper at having to explain to a different GP, yet again, what his problems were.

“We stayed on the waiting list anyway,” Sharon says, “in the hope we could manage it somehow… But Paul deteriorated and was back to the same patterns and behaviour. Sometimes worse than he was to start with.”

A month after Sharon started therapy with PTSD Resolution, Paul agreed to give it a try.

“He came away feeling more positive and lifted than he had in years,” says Sharon. “After a few sessions there was a noticeable difference, he seemed calmer, less angry and more smiley.”

Over the next 18 months they both received regular therapy, sometimes together, sometimes individually – and their situation began to change.

“It’s has been phenomenal,” Sharon says, marvelling at the rate of Paul’s improvement. “There was no forcing information out of him,” she says, and his therapist “went along at the speed Paul could cope with.”

In a sign of progress, Paul agreed to have hearing aids fitted. “He cried when he heard how loud the telly had been,” Sharon says. “We can now watch a film together with ease.”

As well as explaining how the brain works and how PTSD affects our thinking and emotions, Paul’s therapist helped to break things down into manageable elements, Sharon says. “Once Paul realised other aspects were adding to his PTSD, such as hearing and sleeping, he felt more confident in doing something about it and bit by bit it all started to fall into place.”

Soon after, Paul was offered a full time job by a boiler manufacturer. He is “happier working than he’s ever been,” Sharon says, and is showing a renewed interest in life. The arrival of Holly the puppy meant Paul spent more time out the house, walking and developing his passion for gardening. He also turned his hand to woodwork, presenting Sharon with a handcrafted sign for her new cake studio: “A few years ago he would never have had the patience or mental capacity to take on such a task.”

Echoing the feelings of many partners, Sharon says

“I felt selfish for wanting my own head sorted before Paul’s – but I was reassured almost immediately that I did the right thing, in that a carer needs care too.”

PTSD Resolution therapists are keenly aware of the effect military trauma can have on partners and family members, and the way this can trigger their own unresolved issues. The awareness of this interconnectedness is key to PTSD Resolution’s approach to trauma therapy, which can save both lives and relationships.

“Between us we have turned the biggest corner thanks to PTSD Resolution,” Sharon says. They have been nothing other than outstanding and supportive the whole way – and I would encourage anyone affected by PTSD to get in touch with them.

“The speed from the first call to being seen was incredible. Looking back to the day I first made contact was without doubt my darkest time – but within 20 minutes I was being listened to, without judgement, and told it will get better. I was very emotional and I didn’t believe it – but she was right.”

“Who says people can’t change? They can with the right help and encouragement – and we most definitely had that with PTSD Resolution.

“We will be forever grateful to PTSD Resolution.”

PTSD Resolution helps UK Veterans of the Armed Forces, Reservists and family members with their mental health, for all branches – army, navy and airforce. The service is free, local, prompt and effective with 78% resolution of symptoms, to where the client and therapist agree that no further treatment is required.