You are here: Home / News / News / Armed forces charity warns of growing financial hardship and food poverty amongst veterans and their families 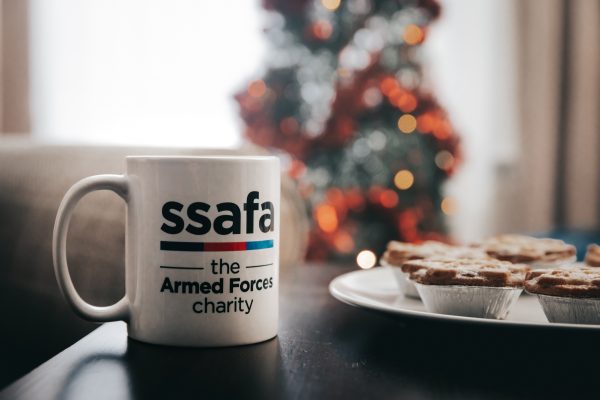 SSAFA is urging members of the Armed Forces community to step forward to access the support they need, as the charity is witnessing more struggling to make ends meet following the Covid-19 pandemic and rise in household living costs, including heating and rent.

At the height of the pandemic, in 2020, the charity’s Welfare Grants team received 1,241 requests for support, with 628 people being supported with funds totalling £231,670. In 2021 so far, over £39,300 has been provided towards 138 cases in times of urgent need – but the charity expects this to rise as the winter weather starts to bite.

Throughout the crisis, SSAFA’s work to support those who are suffering financial hardship has been funded by a variety of donors, including the charity’s corporate partners, Boeing and Sodexo. In 2020, SSAFA’s Boeing Crisis Fund, directly helped 387 individuals and families, with over £60,500 being distributed to those most in need.

The Boeing Crisis Fund was set up in conjunction with SSAFA in direct response to the Covid-19 pandemic, enabling the charity to provide quick and urgent assistance in the form of food vouchers, white goods such as cookers and support with rent.

Since 2008, SSAFA has been supported by the Sodexo Stop Hunger Foundation, to provide essential items, such as food, clothing, rent and debt relief, to SSAFA beneficiaries. Since the Covid-19 crisis began, SSAFA has provided a total of £45,544 to members of the Armed Forces community in financial distress from this fund.

Signs so far show that 2021 figures have almost certainly decreased from the crisis of 2020, but with the latest Government data showing food inflation 1.4% higher than pre-pandemic, the worst could be yet to come. The charity is concerned that many vulnerable members of the Armed Forces community, particularly veterans, will suffer from financial hardship and food poverty this winter.

“A proportion of the Armed Forces community – especially veterans who have served this country and their families, will struggle this Christmas and further into the new year with their finances and other issues. Amongst their challenges will be isolation, mental wellbeing and food poverty.

”Veterans are proud and reluctant to reach out for help; I would urge them not to suffer in silence as SSAFA is there for them and their families, whenever and wherever they need us. Just as they served this Nation, SSAFA is here to serve them.”

With Christmas approaching, the charity’s network of volunteers, operating both in the UK and overseas, are preparing to provide for those members of the Armed Forces who may need to make tough choices this winter when it comes to their finances, including household bills and food.

The charity has a long tradition of celebrating the festive season by delivering hampers and gifts to veterans and their families via its extensive branch network, and this year many of SSAFA’s branches, including Edinburgh and Devon, are continuing that tradition.

One of the three main areas of veteran deprivation identified by the Map of Need research is Scotland’s central belt. Glasgow Helping Heroes, a partnership between SSAFA and Glasgow City Council, supports veterans in the local area, which has been identified as a region where many veterans are struggling with food poverty and are in debt.

Glasgow Helping Heroes saw food poverty more than double amongst its beneficiaries in 2020, with 56 separate clients receiving 156 emergency food supplies, including foodbank and supermarket vouchers. In comparison, prior to the pandemic, only 26 clients required this form of support in 2019.
Elsewhere in the UK, SSAFA continued to support beneficiaries who were suffering as a result of the Covid-19 pandemic. British Army veteran, Derek Taylor, knows all too well these challenges – as Britain went into the first lockdown in March 2020, the Warwickshire-based father’s first concern was how he was going to feed his four children.

Self-employed for less than a year, when the pandemic hit, the former Corporal in the Fusiliers was not able to access any of the Covid-19 support from the Government, including the furlough scheme.
He said:

“I just didn’t know how I was going to pay for anything. I was walking around my house aimlessly, and then just sitting in my living room on the edge of my seat staring at the walls because I was lost. I’m a single dad who went from working 18-hour days to provide for my children, to being locked inside with nothing coming in. The whole thing has been so severe.”

Derek applied for Universal Credit but was told he was not eligible to receive these funds because of his Armed Forces pension. This was in spite of having four children to look after, with the two youngest, aged two and five, living with him permanently during the pandemic as their mother was working in a care home.

“I have never had to claim for anything in my life, and as a soldier, I’m a proud man. I never wanted to have to ask for help, especially to keep the roof over the heads of my children. I couldn’t work as normal because it would be irresponsible and put people at risk.”

He began receiving support through an NHS Veteran’s Mental Health Service when he mentioned the financial problems he was facing – thankfully his psychiatrist put him in touch with SSAFA. Derek said:

“I broke down, and though it was hard to admit I needed help, by that point I was willing to do anything. People kept saying it’s good to talk, but all I could think was talking wasn’t going to put a roof over our heads.”
Derek was contacted by a volunteer from his local branch in North Warwickshire who put a case together to help with his rent, as well as food and supplies.

“It took ten days from me being utterly lost to knowing I could get by again. My rent was paid, and my caseworker also gave me £450 for food and supplies. I was then able to use my pension to pay my bills and even managed to buy pyjamas for my children – that was amazing.”

“If I didn’t speak to SSAFA when I did, there is a chance I wouldn’t be here now. I know many veterans and soldiers who have committed suicide because of trivial things like debt and not knowing who to turn to. When I was first going through the process, I didn’t have a clue where to go, but now I would tell anyone to go to SSAFA. Don’t be too proud or think they won’t understand. They are brilliant and know how to put you back on your feet and give you direction.”

SSAFA believe that no-one should have to make the choice between heating and eating, so if you would like to contact SSAFA to receive support or find out more, visit ssafa.org.uk/get-help/forcesline for a confidential webchat or call one of our Forcesline advisors on 0800 260 6767 (Open 09:00-17:30, Monday to Friday, excluding bank holidays).