You are here: Home / News / News / Army veteran from Conwy competes in Race the Train for local military charity 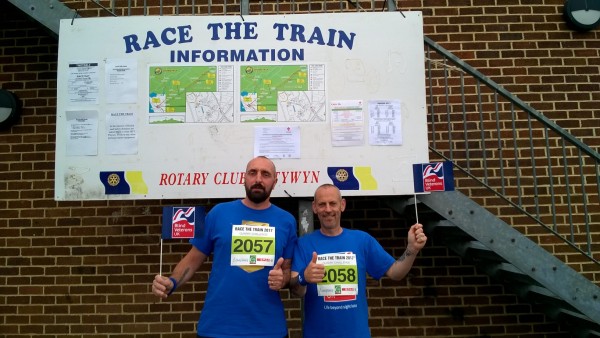 An army veteran from Conwy has competed in the Race the Train Quarry Challenge for Blind Veterans UK, the national charity for blind and vision-impaired ex-Service men and women.

Kevin Williams, 44 and from Glan Conwy, narrowly missed out on glory after finishing the 10 kilometre course in 56 minutes and 27 seconds, with the train coming in at 55 minutes. Kevin says: “It was a great day all round and it was fantastic to see so many people out in support.

“This was actually my second time attempting the challenge, with the first being when I was 20 years old! I’m looking forward to giving it another go next year and would encourage others to do the same too.”

The event, which took place on Saturday 19 August in Tywyn, Mid Wales, saw Kevin and his friend, Dewi attempt to beat a steam train on the Talyllyn Railway. The diverse terrain featured a tricky mix of fields, narrow pathways and water streams. 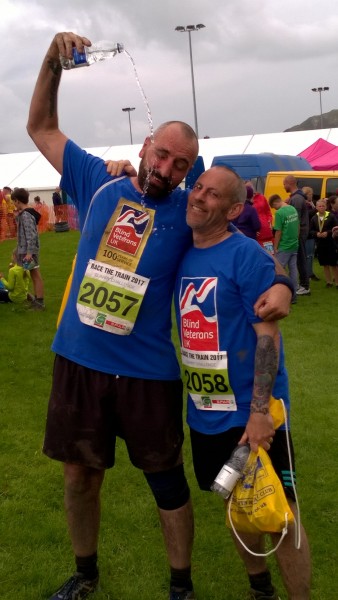 Kevin has long been a supporter of Blind Veterans UK, due in part to his own military background. He says: “Dewi and I served together in The Royal Welch Fusiliers back in the early 1990’s, that’s when we became great friends. Unfortunately, once we’d both left, it inevitably became harder to remain in contact and eventually we lost touch.

“Fortunately, thanks to the magic of Facebook, we reconnected eight years ago and now we get our families together quite often.”

Despite their military days being behind them, their strong desire to support the brave men and women who risk their lives for our country remains undiminished. Kevin states: “We’re both committed to supporting as many military charities as we can. We’ve long been arranging charity football matches between ex-Royal Welsh Fusiliers and local football teams in Llandudno. They always prove to be great fun for everyone involved and, most importantly, raise a lot of money and awareness for some fantastic causes.”

Their involvement with Blind Veterans UK has increased tenfold since 2013, with both Kevin and Dewi supporting a number of the charity’s fundraising events. Kevin explains: “We’ve helped out as marshals, gotten other ex-fusiliers involved and even made the tea! It’s a wonderful charity and we’re happy to help out in any way we can. Being veterans ourselves, we’ve seen first-hand the difference the charity can make in providing support, rehabilitation and training to vision-impaired ex-military personnel. Make no mistake, any extra funding we can help direct their way will be invaluable.” 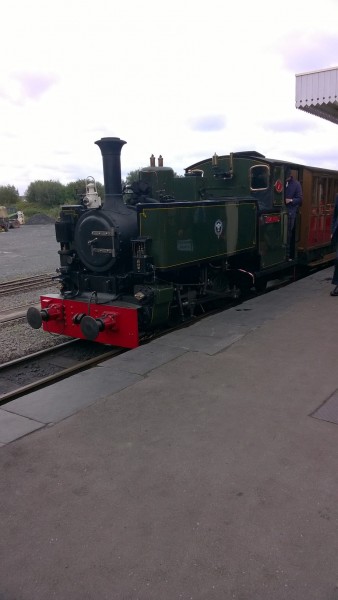 Without the support of Rachel and Michelle, Kevin and Dewi’s wives, the ongoing support that Blind Veterans UK has been able to receive from the two veterans would not be possible.

In total, Kevin’s philanthropic efforts for Blind Veterans UK have raised almost £6,000, an incredible feat and something that has placed Kevin among the charity’s most valued community fundraisers.

To donate to Kevin and Dewi as they continue in their efforts to ensure there is life beyond sight loss for blind veterans, please visit: justgiving.com/kdchasethetrain.

To find out more about the Race the Train Quarry Challenge, please visit: racethetrain.com.