You are here: Home / News / News / Bedford blind veteran looks forward to 2018 thanks to support of military charity 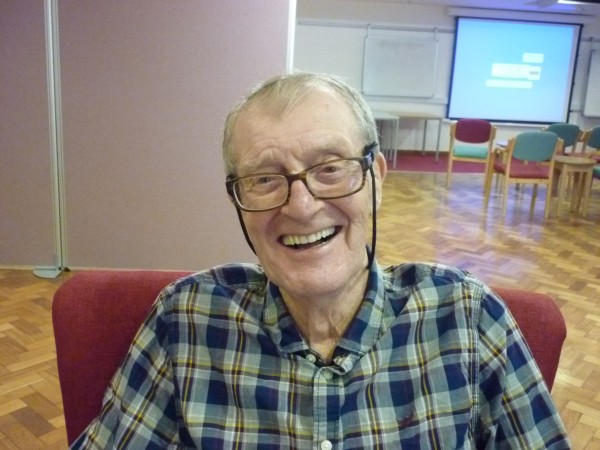 A blind veteran from Bedford has praised Blind Veterans UK for the help he has received in the past year after losing his sight. Brian Hill, 89, started receiving support from the charity this time last year.

Brian says: “Since joining Blind Veterans UK I’ve tried all sorts of things I’d written off because of my sight loss. It’s been a great year and I’m looking forward to plenty more adventures in 2018!”

Brian joined the Royal Air Force (RAF) in 1945 and spent the majority of his Service in Germany. He worked in operations, plotting the location of aircrafts and reporting on weather conditions for pilots.

Brian says: “I was stationed in Germany during the time of the Berlin Airlift. We travelled to Berlin through the Ruhr and I saw some difficult sights. When we arrived the region was completely devastated. There were demolished factories everywhere and a real feeling of chaos.”

Brian was discharged from the RAF in 1949 and went on to work as an accountant. In his spare time he enjoyed calligraphy and painting. It was years later, around 2000, that Brian’s sight began to deteriorate.

Brian says: “When we retired my wife and I bought a caravan and we travelled all across Europe and the UK. One summer I was driving to Cornwall and it seemed like all the telegraph poles had a big kink in them. I realised at that point there was something funny going on with my eyes.”

Brian was eventually diagnosed with age-related macular degeneration by Moorfields Eye Hospital. Over the years his sight deteriorated until Brian could no longer read and had to give up driving. Sadly, in 2013, Brian’s wife passed away and he found himself battling sight loss alone.

Brian says: “I didn’t feel brave anymore. I lost my confidence in going out and about by myself and I stopped doing the things I enjoyed.”

Fortunately, Brian found out about the support of Blind Veterans UK and joined the charity this time last year. Since then Brian has taken an introduction week at one of Blind Veterans UK’s rehabilitation centres, been given an electronic magnifier so that he can read letters independently, and enjoyed getting in touch with his creative side again through a painting course organised by the charity.

Brian says: “When my sight went, I thought I would never be able to paint again because I couldn’t even see the tip of a paintbrush. But one of Blind Veterans UK’s instructors showed me a technique where you use masking tape to divide the canvas. That allows you to paint clean lines. I was even given some acrylics to take home and I presented both my sons with a painting for their Christmas present!”

He continues: “The charity has really given me back my confidence and I’ve already persuaded one of my friends to join. To the other blind veterans out there I’d suggest you make it your New Year’s resolution to give Blind Veterans UK a call.”

Blind Veterans UK estimates that there are more than 100 ex-Service men and women in Bedford battling severe sight loss who could be eligible for the charity’s support but who do not realise it. It doesn’t matter when or how a veteran lost their sight, or when they served, Blind Veterans UK can help.